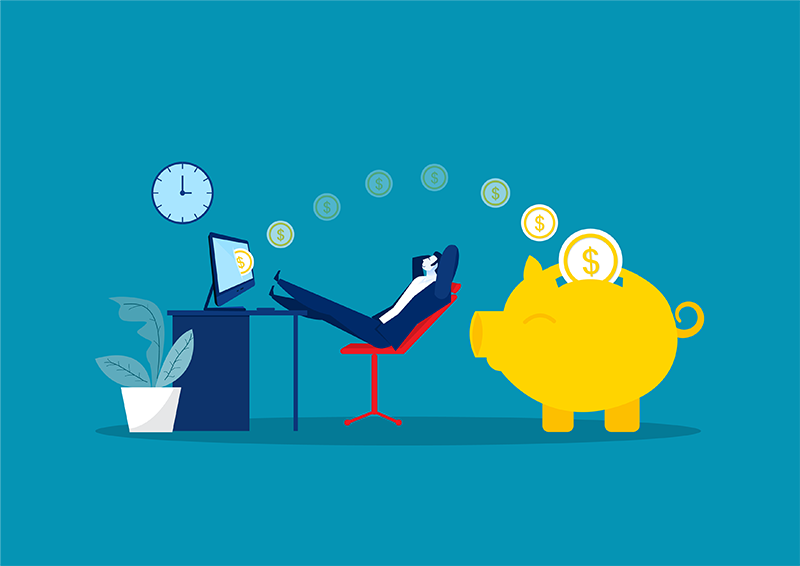 Now we turn to Bonds (also referred to as Fixed-Income Securities). Stocks tend to hog much of the limelight when it comes to investment coverage as people are lured by the promise of skyrocketing returns, leaving bonds languishing as the forgotten and unloved counterpart. While bonds lack the showmanship and panache that stock investing brings to the table, they play a vital role in balancing investment portfolios and helping people keep money available for shorter-term needs.

Bonds lower risk, lower reward mantra has failed to grab quite as many headlines over the years. Despite this, their popularity has exploded, as the trend towards lower rates makes financing cheaper than ever for governments and corporate borrowers alike. Estimates suggest, the global bond market has more than tripled in size in the past 15 years and now exceeds $125 trillion. By contrast, the global stock market has an estimated value of around $71 trillion. The bond market’s relative size signifies the vital role it plays in the financial industry, even if it doesn’t function as the default talking point for many investors. 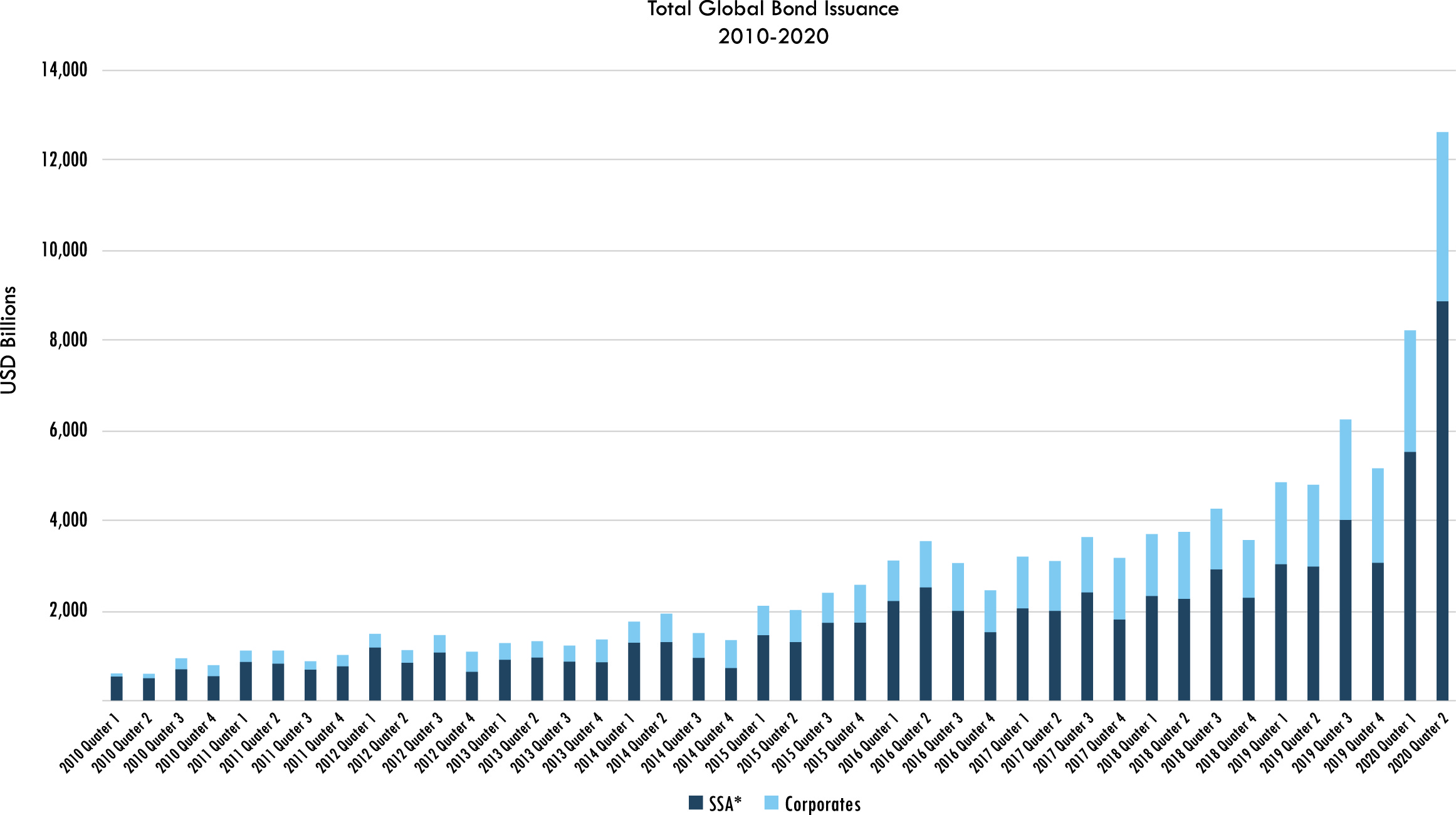 What is a Bond?

A bond is simply a loan given to a government or company by an investor who, in return, is paid interest on the money they have loaned. Like a loan, a bond pays interest periodically and repays the principal at a stated time, known as maturity.

When you own a share of Microsoft, you become a partial owner of the company. As an owner, you get to participate in the company’s profits. Bondholders don’t share in a company’s profits. The interest and principal they receive doesn’t change, no matter how profitable the company is. This results in a more steady and consistent income stream for investors. Bonds are typically viewed as less risky investments, but like any investment, they are not without risk. For instance, there are rare cases, such as bankruptcy or default, in which a bondholder’s payments may be changed or canceled.

Bond issuers offer an interest rate to investors known as a coupon rate. This coupon rate is dependent on the bond’s maturity, prevailing market interest rates, and creditworthiness of the underlying issuer. It’s expressed as an annual percentage of the face value. A 3-year $1,000 bond with an 8% semi-annual coupon pays $80 of interest every year in two $40 installments, repaying the original $1,000 principal after 3 years.

An alternative to the fixed-rate bond example above is a floating or variable rate bond. The initial coupon rate will be set as a percentage spread over a benchmark, for example, Libor +0.5%. Here the coupon rate will be 0.5% more than Libor (London Interbank Offered Rate), regardless of what the Libor is, allowing the coupon rate to rise and fall as interest rates change. As a result, floating-rate bonds have significantly less interest rate risk exposure relative to fixed-rate bonds. 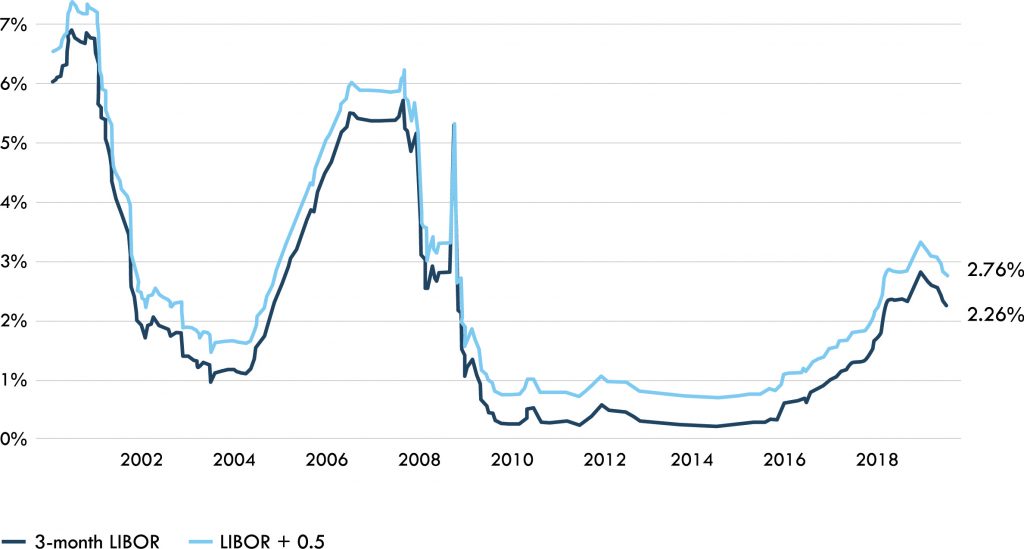 Many investors have the sense that bonds are safer than stocks and conclude that they can never lose money on a bond. Yet, some bond prices can move violently when interest rates change, while others can have equity-like characteristics depending on the credit quality of the underlying bond. For this reason, it is vital to understand the broad range of bonds that exist across the risk spectrum.

These are bonds issued by a national government, denominated in the country’s own currency. Government bonds are usually referred to as risk-free bonds, given a countries ability to print money or raise taxes to avoid any potential bankruptcy.

The most common government securities are those issued by the U.S. government and are referred to as Treasury securities. These government bonds are available across a wide range of maturities, each offering different potential returns.

Given the ‘risk-free’ nature of these treasury securities, broadly speaking, a sharp downturn or an economic crisis won’t hurt their performance. In fact, an economic crisis may help performance as market uncertainty results in a ‘flight-to-safety’ from risk assets into quality bonds. This uncorrelated relationship with risk assets makes safe-haven bonds such as U.S. Treasuries an important component when diversifying your portfolio.

Short-term bonds such as Treasury-bills provide portfolio liquidity but offer little upside potential. Longer-term bonds are considered riskier because there’s a greater likelihood that adverse events, such as rising interest rates and inflation, will hurt the bond’s value during its lifetime. To compensate for this, these longer-term bonds typically offer higher coupon rates.

These are bonds issued by companies to raise money for business purposes, e.g., to expand operations or fund new business ventures. Corporate bonds typically represent a greater propensity to default as companies can and do go bankrupt. As a result, they often offer higher coupon rates to compensate for this default risk.

Corporate bonds fall into two broad categories: Investment Grade and non-Investment Grade bonds (also referred to as high-yield or junk bonds). It is imperative that investors understand the difference as the financial health of issuers can vary significantly across the two categories.

Credit rating agencies such as Moody’s and Standard & Poor’s assign ratings to bonds based on their overall risk. These agencies evaluate issuers’ creditworthiness based on criteria such as the issuer’s track record of repaying its debt. Based on its rating, a bond qualifies as either investment-grade or non-investment-grade.Credit Rating Agency Scale
Credit Rating Agency Scale

These ratings help bond investors to gauge the financial strength of the bond issuer. As the name suggests, non-investment-grade bonds are considered lower quality. As a result, investors will need to be offered a higher coupon rate to entice them to take on the excess risk, hence why they’re also called high-yield bonds.

Rating agencies can downgrade or upgrade a company’s rating, so monitoring a bond’s rating is essential. If a bond is sold before it reaches maturity, any change in a bond’s rating can affect the price others are willing to pay for it.

Sovereign (bonds issued by a national government in a foreign currency)  and corporate bonds issued by developing countries are also known as emerging market bonds. Given the variety of countries involved, there is a large disparity in the growth prospects of different emerging market bonds. These bonds usually offer very attractive yields and pose unique risks such as currency fluctuation, economic, and political risk.

These are groups of home mortgages that are pooled together and sold as a single security. Mortgage lenders sell individual mortgage loans to another entity that bundles those loans into a security. This new security pays an interest rate similar to the mortgage rate being paid by the homeowners. MBS, like all other bonds, are sensitive to changes in prevailing interest rates.

Credit spreads can be used when comparing different categories of bonds. Credit spread refers to the difference in return (yield) between two bonds with the same maturity but with different credit ratings. For example, if the 10-year U.S. Treasury note is trading at a yield of 1% and a 10-year corporate bond is trading at a yield of 5%, the corporate bond is said to offer a 400-basis-point spread over the Treasury. Again, this 4% spread is compensation for the extra risk exposure—the more volatile the economic outlook, the wider the credit spread. 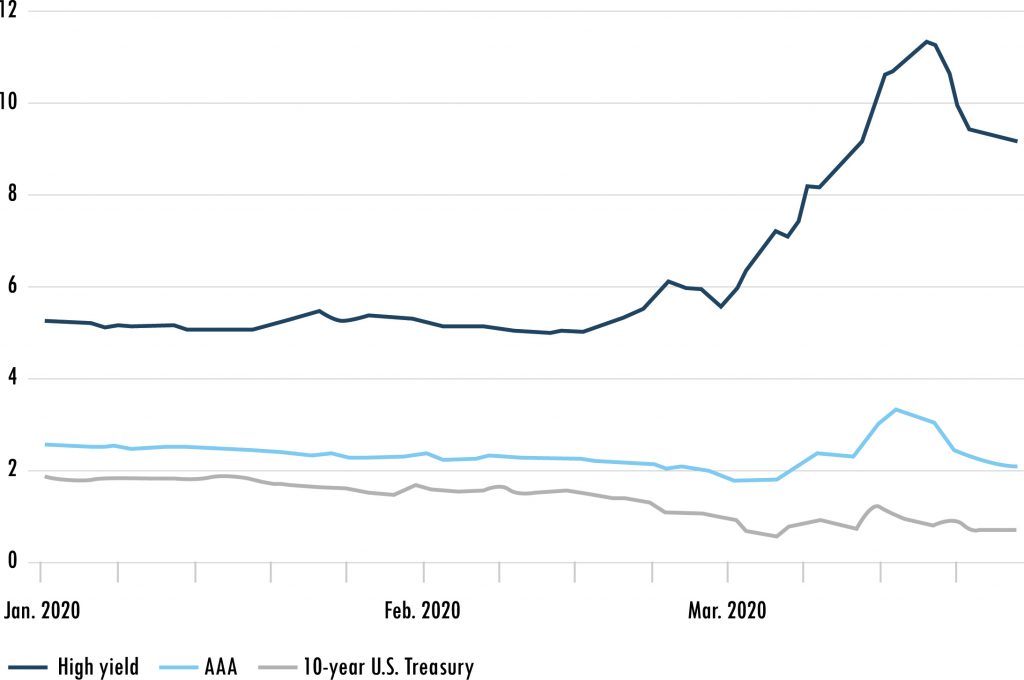 Spreads widen as the economic fallout from the COVID 19 pandemic unfolds
https://research.stlouisfed.org/publications/economic-synopses/2020/04/13/secondary-market-corporate-credit-facility-supports-main-street

The possibility that the issuer will be unable to make the required interest and principal payments when they are due. The higher the default risk, the higher the coupon rate. The amount of risk depends on the financial stability of the issues. For example, most governments are relatively stable issuers and issue bonds with low coupon rates as a result.

The potential for investment losses that result from a change in interest rates.

Before diving any deeper, it’s important to remember that a bond’s price and market interest rates move inversely (in opposite directions). As interest rates fall, the value of the underlying bond rises, and vice versa.

Duration quantifies the amount of interest rate risk a bond is exposed to. The higher a bond’s duration, the more sensitive its price is to interest rate changes. For instance, if interest rates rise by 1%, the price of a bond with a duration of 4 will fall by 4%.

While some bonds, such as U.S. treasuries, are virtually devoid of any credit risk, all fixed-rate bonds will have a sensitivity to interest rates changes. Generally speaking, long term bonds will be exposed to more interest rate risk than short-term bonds.

Price fluctuations caused by changes in interest rates are only relevant to individual bondholders who sell before maturity. As long as you hold your bonds until maturity and the issuer doesn’t default, you will receive your full principal back, plus interest, regardless of the market price fluctuations experienced between issuance and maturity.

Broadly speaking, bondholders will suffer when inflation surges as this inflation will erode the purchasing power of the fixed payments you receive. Longer-term bonds will face more significant inflation uncertainty, which is reflected in the higher return on offer.

Why Invest in Bonds?

Capital Preservation: Unlike equities, bonds offer safety of interest and principal (with the exception of defaults). This makes bonds appealing to investors who want to reduce the risk of losing capital.

Income: Most bonds provide the investor with a fixed income stream on a scheduled basis, which can be spent or reinvested into other bonds.

Capital Appreciation: While capital appreciation is more synonymous with stocks, it is not exclusive to the stock market. As mentioned above, bond prices can rise for several reasons, including a drop in interest rates or an improvement in the issuer’s credit rating. By selling bonds prior to maturity, following a rise in the bond price, investors can benefit from capital appreciation.

Diversification: Historically speaking, bonds have had a low correlation to stocks, meaning their value is often up when stocks are down. Because of this, high-grade corporate bonds and especially U.S. government bonds, can be beneficial for diversifying the risks of owning stocks.

Slower economic growth usually leads to lower inflation, which makes bond income more attractive. An economic slowdown is also typically bad for corporate profits and stock returns, adding to the attractiveness of bond income as an alternative source of return.

The recent economic upheaval has acted as a catalyst for change across many areas of investing. Arguably the most substantial of these is the fundamental changes to the traditional asset allocation approach.

The risk parity relationship between Equity and Treasury Bonds has seemingly broken down as the long-term risk-reward ratio of owning bonds is no longer appealing from an income-generating and capital appreciation standpoint.

In portfolio construction, retail investors have often gravitated towards a 60/40 asset allocation split (a portfolio made up of 60% equity and 40% bond exposure). Safe-haven bonds have historically functioned as the traditional counter to equity headwinds, ensuring that a blend of the two uncorrelated assets would lead to broad-based portfolio diversification over the longer term.

However, recent monetary stimulus has created a challenging landscape for fixed income, with Treasuries offering interest rates of close to zero, all but eliminating their upside potential.

It’s worth noting that bond yields have been declining globally for around a decade, a trend that predates the pandemic.
Source: Bloomberg

The diversification and capital preservation benefits of these safe-haven bonds have not gone away, but longer-term investors may want to be underweight traditional fixed-income as the economy re-emerges, opting instead for alternative investments such as commodities, private equity, real estate, and venture capital to generate acceptable returns while still availing of adequate portfolio diversification.