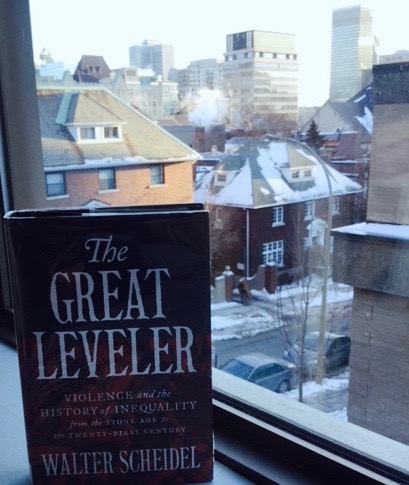 Just when you thought you knew just about everything having to do with economic inequality, along comes a book whose title at first blush appears highly implausible, if not outrageous.

The world could be considered to have enjoyed relatively even prosperity among its peoples as long as they were simple foragers. All of that changed with the advent of the agricultural revolution in the Fertile Crescent around 10,000 BC. With the transition from foraging to domestication, growth started to occur, prompting an increasingly uneven distribution of resources that, with some notable exceptions, continues to this day.

For, if the author is right, history has shown that levelling of incomes has occurred only in the presence of what he calls The Four Horsemen, namely mass warfare, transformative revolution, state failure, or lethal pandemics.

For our purposes, I shall limit myself to the first two, as we were witness to both in the previous century. The two wars were incomparable with anything that preceded them, in their breadth and depth; one example would be the percentage of a nation’s male population called up. This, as one can well imagine, tested a state’s resources to the limit, thereby necessitating government intervention to an unprecedented extent, and causing a levelling of incomes known as the Great Compression, concentrated in the period from 1914 to 1945. The Great War also precipitated the Russian Revolution, which had a state-imposed levelling effect never seen before or since.

If one subscribes to the author’s theory, and assumes there will be no more wars or revolutions on the scale of what occurred in the previous century, then it’s safe to say we have little or no chance of reducing the increasing disparity in incomes we are witnessing today. Piketty, as I recall, suggested a tax on capital, although few politicians would attempt such a move, as there is no guarantee it would have the intended effect. The trend, rather, is in the opposite direction, as governments almost everywhere are reducing personal and corporate taxes.

Scheidel, The Great Leveler: Violence and the History of Inequality, Princeton