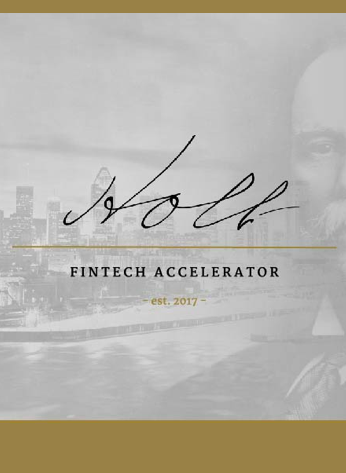 MONTREAL, QC (April 26, 2018 – 5 PM ET) – The world of fintech is shining brighter than ever. With more than 100 years of family investment experience, Holdun is pursuing its legacy by encouraging those building the future. To do so, today it is launching the Holt Fintech Accelerator Program. Announced in Montreal and aimed globally, the accelerator program will support the next generation of entrepreneur talents operating in the fintech industry. This project extends the entrepreneurship legacy of Sir Herbert Holt, Quebec’s energy pioneer, who created one of the largest privately owned utility in the world, now known as Hydro-Québec, as well as for his financial industry impact, as he was the longest serving chairman and president of the Royal Bank of Canada.

“Coming from a family of entrepreneurs, it feels very logical to me to honour the entrepreneurial spirit that the family has been cultivating, with a focus on fintech and AI,” says Brendan Holt Dunn (Sir Herbert’s great, great grandson), Founder and Managing Partner for the Holt Fintech Accelerator Program. “We want to give back to the community and, thanks to this program, we’ll definitely be able to make a difference in the future for these startups.”

The Holt Accelerator is currently engaged in a global search for the next 400 rising stars in fintech to take part in the program, and it encourages all interested candidates to submit their applications through the Holt Accelerator website by July 29th for a chance to participate. With only 10 spots in the program, the company offers participants a unique opportunity to benefit from hands-on help through committed partners, trainings, world-class mentors, immersion in the fintech environment, board meetings and financial investments. The Holt Accelerator Program is also the only accelerator offering one of Canada’s largest applied AI solution providers, Stradigi AI, an undeniable resource for all fintechs wishing to get ahead. Future sustainability is also central to the program, whose leaders think about and provide solutions for sponsorships, funds and business models. Everything is thought through to get the best out of the program and unleash the selected startups’ full potential.

For the launch of this project, Holdun couldn’t think of a better city than Montreal. Home to the second largest talent pool in North America, with more than 170,000 students, Montreal was named first “American City of the Future” in 2013-2014.  A world-class leader in AI and blockchain, Montreal holds everything that’s needed for the future of society, and offers great perspectives for the expansion of the fintech industry.

The Accelerator is also pleased to announce the arrival of Jan Christopher Arp as co-Managing partner. With over a decade of experience, Jan was most recently supporting or forming over 100 fintech startups through the non-profit he founded, FormFintech.  He also holds an MBA from HEC and a finance degree from the University of Ottawa, and has completed two levels of his CFA.

“We’re really pleased to welcome an experienced player such as Jan to the Accelerator Program,” notes Brendan Holt Dunn. “With a deep understanding of the fintech industry, he certainly is a key player in stepping up the game for fintech startups and unlocking their full potential.”

The Holt-Dunn family is the direct legacy of Sir Herbert Holt, and one of Montreal’s finest. Their ancestor immigrated to Canada in 1873 and built the Montreal Light, Heat & Power Company, which would later be expropriated and is now known as Hydro-Québec. Business people at heart, members of the family founded or owned over 300 companies locally and internationally. At one time, the family possessed assets accounting for about three billion dollars (equivalent to forty billion dollars in today’s currency). That amount was 10 times larger than the Canadian government’s circulating currency. Sir Herbert Holt was inducted into the Canadian Business Hall of Fame in 1979 and is, to this date, the longest-serving chairman and president of RBC (from 1908 to 1934). His participation was crucial in turning RBC into the country’s largest bank and the third largest in North America.