How Long Can It Last? - Holdun

How Long Can It Last? 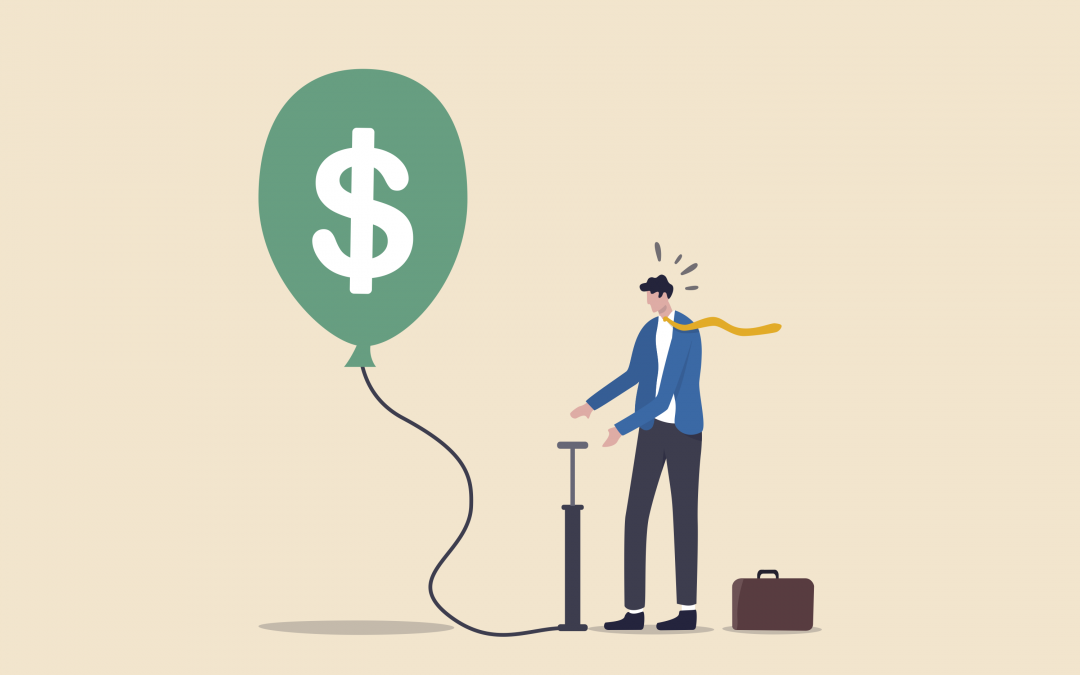 At the midway point of the year, it’s fair to say that there is a lot to be optimistic about.

The stock market has maintained its upward march, with the S&P 500 recordings its 5th consecutive quarterly gain.

The S&P 500 has now doubled in value in just 15 months following the March 2020 Pullback: The second fastest double in history, second only to the 1932 reversal after the infamous 80%+ crash of the great depression. 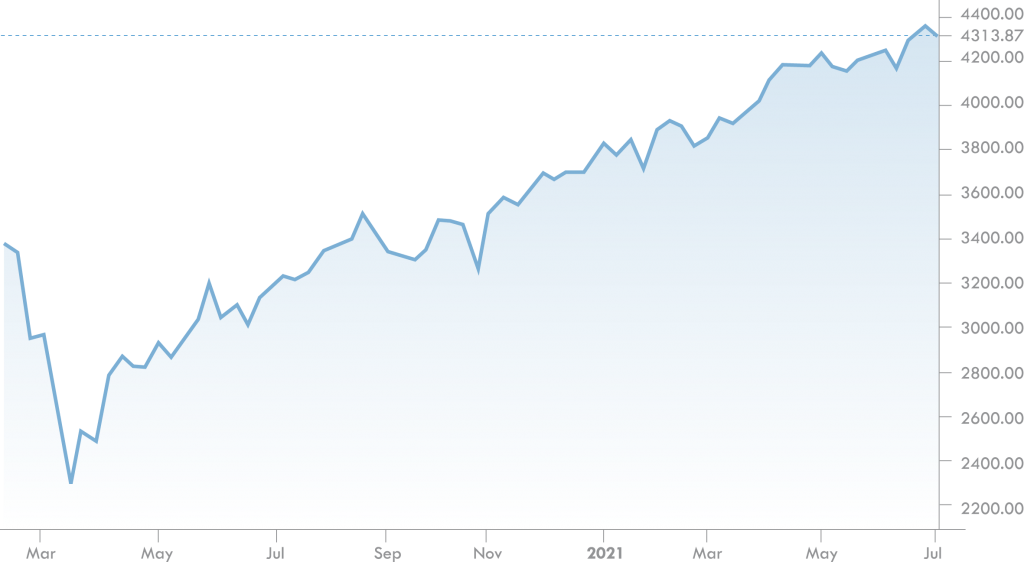 Is Inflation Here to Stay?

With commodities continuing to soar and Washington debating even more stimulus, inflation was the market buzzword of choice over the quarter.

Metals, food, and energy are at the fulcrum of any growing global economy. Over Q2, widespread supply bottlenecks and post-pandemic demand across all of these industries combined to sent commodity prices to their highest levels in almost a decade.
In May, core consumer price index (CPI) inflation rose from 3% to 3.8% year-on-year – the largest increase since June 1992. Since last year, lumber had tripled in price before pulling back strongly in June, while Copper has jumped over 80% from its pandemic low point.

The most recent pullback is evidence that the supply-side contraction will likely be short-lived as bottlenecks ease. With that said, the current, high demand, low supply environment looks set to keep commodity prices, and inflation elevated over the near term. Still, we expect the current higher rate of inflation growth to be transitory in nature.

Economies around the world continue to heal. The ‘re-opening demand’ has generated broadly positive economic data, helping to bolster both unemployment and earnings.

Employers added 850,000 nonfarm jobs in June, well above consensus estimates of around 700,000 and the most since last August.

Cumulative Change in U.S. Employment Since the Pandemic Began 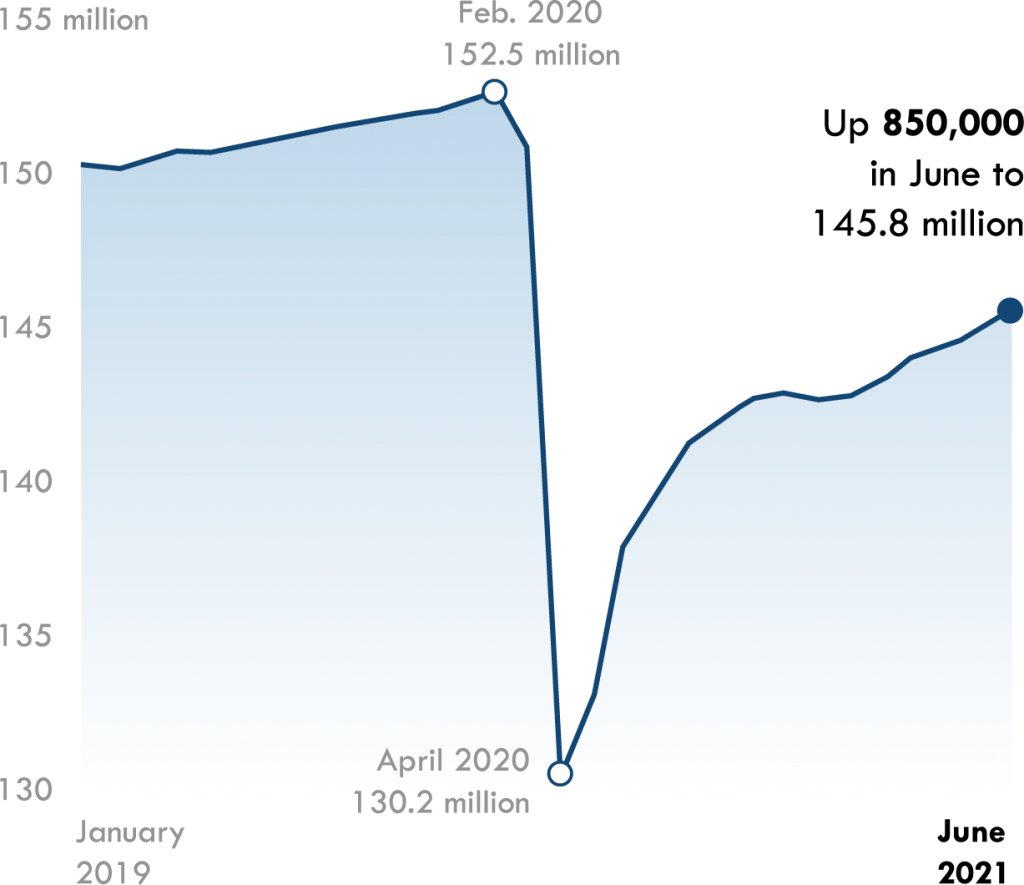 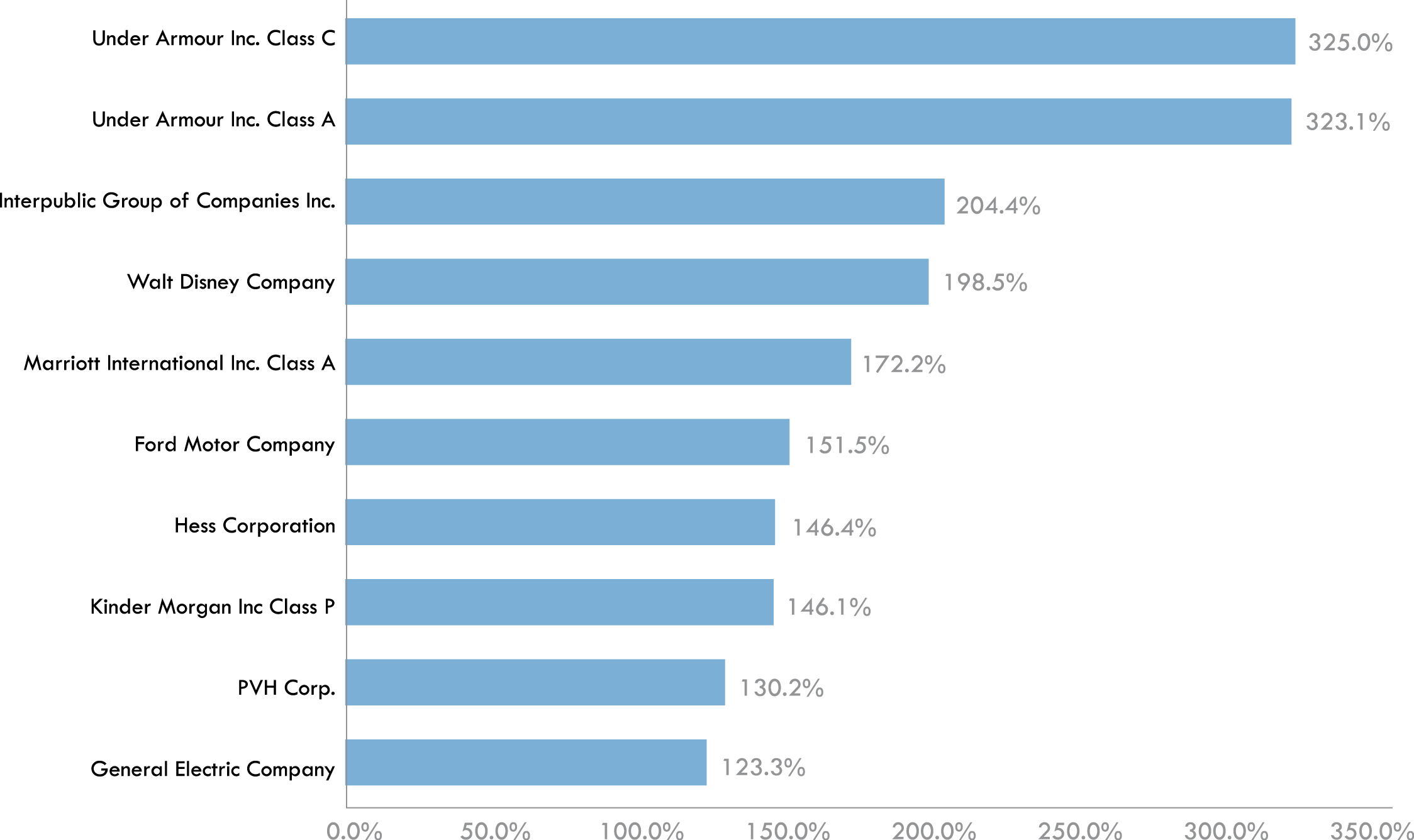 For Q2 2021, the estimated earnings growth rate for the S&P 500 is expected to reach 63.6%. While these year-over-year figures need to be taken with a pinch of salt, given the earnings depravity witnessed in 2020, they highlight the substantial rebound these companies have made and continue to make since the onset of the pandemic.

Valuation metrics, while certainly high by historical standards, have benefitted from the earnings recovery. 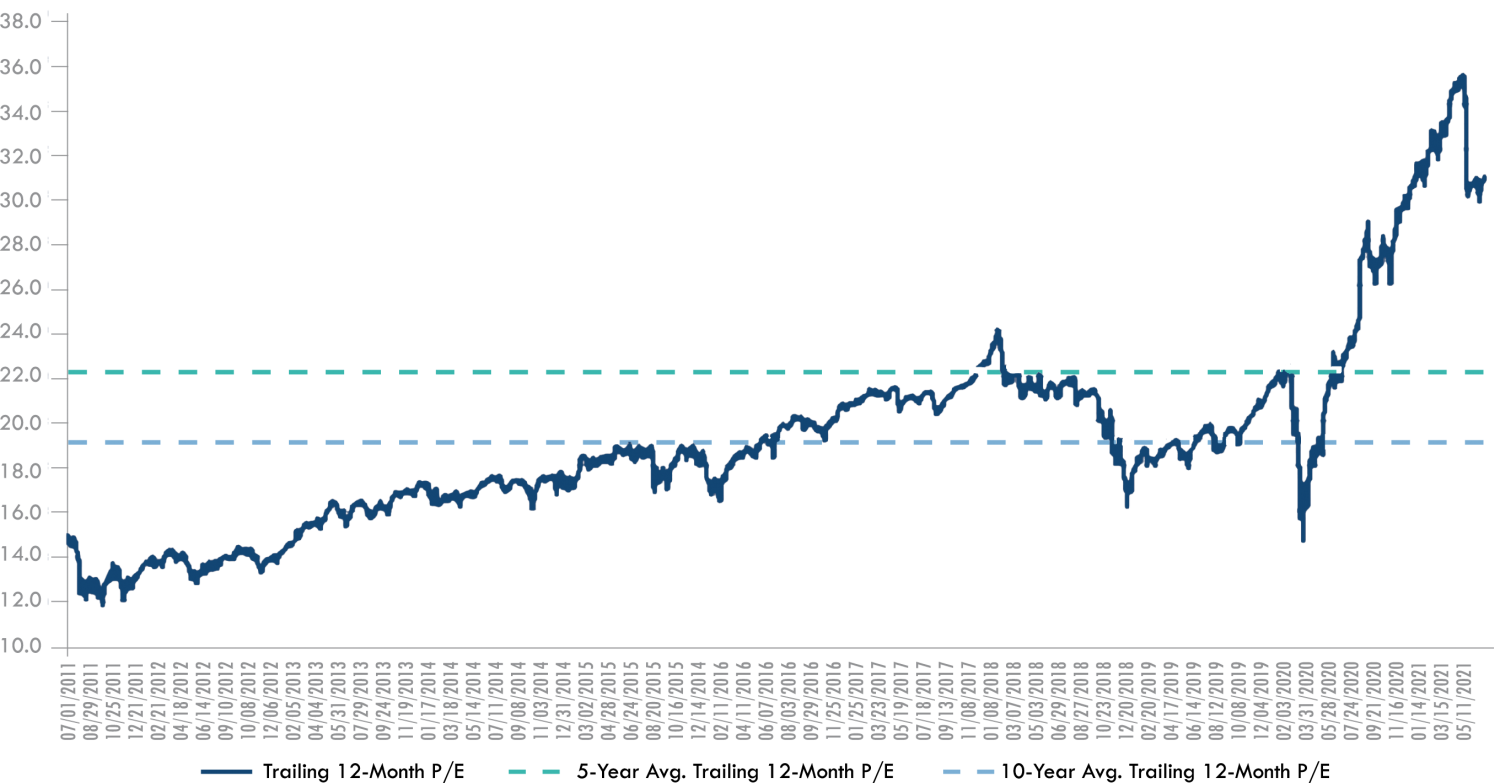 Recreational activity has started to resemble some sort of normality as people dare to dream of vacations, weddings, concerts, and everything in between. All the while, governments have kept their foot on the gas, with fiscal support becoming even more robust. Although the most recent $1 Trillion Infrastructure plan fell short of the $2.3 Trillion infrastructure plan announced in March, it highlights the current government’s willingness to maintain spending and support. 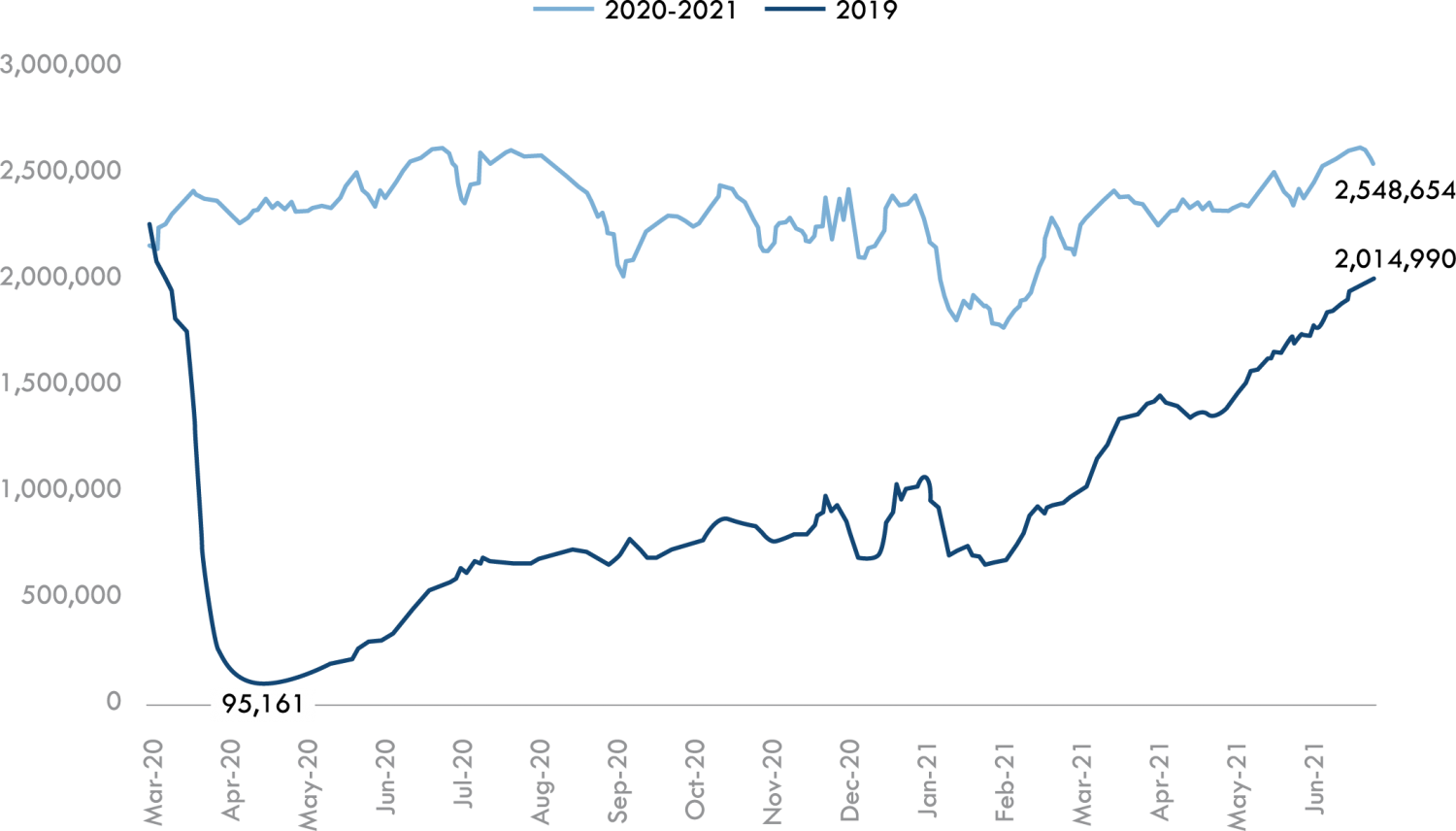 US Treasury yields declined over the quarter, with the 10-year falling from 1.74% to 1.47%, retracing much of the Q1 gains. Eased inflation fears kept yields from climbing as the quarter drew to a close

Despite the annualised inflation rates rising well above target, to levels not seen in over a decade, investors continued to speculate about whether or not current inflation levels would prove transitory.

June’s hawkish Fed meeting solidified this transitory outlook as the FED’s tolerance to an inflation overshoot seemed to wain, removing the market’s assurance of unlimited policy support. In response, the 2-year yield rose following the meeting, and the 10-year yield fell, with the curve flattening.

Bitcoin was setting all the wrong records over Q2. Holders experience the worst second-quarter percentage decline in its history, weighed down by government actions and persistent demand for downside hedges.

The quarter started strongly, with bitcoin rallying to a record $64,801 in the run-up to the Coinbase IPO on April 14th. However, momentum stalled in subsequent weeks as retail investors struggled to offset considerable whale selling.

A steady stream of negative news in May saw all of Bitcoins 2021 profits evaporate in a matter of weeks. In China, the crackdown on crypto miners continued, while in the U.K., regulators ordered Binance, one of the world’s largest cryptocurrency exchanges, to cease all regulated activities by June 30th.

Since then, directionless trading has seen Bitcoin fluctuate between $30,000 and $40,000, down almost 50% from its mid-April highs.

The power struggle between growth and value continued over Q2. Growth-heavy equities had been beaten down by the fear of rising interest rates in the face of inflationary pressures since mid-February but bottomed out in mid-May. As the quarter drew to a close, many investors switched sides, backing the tech names to outperform in a rapidly digitalizing economy despite their higher valuation metrics. 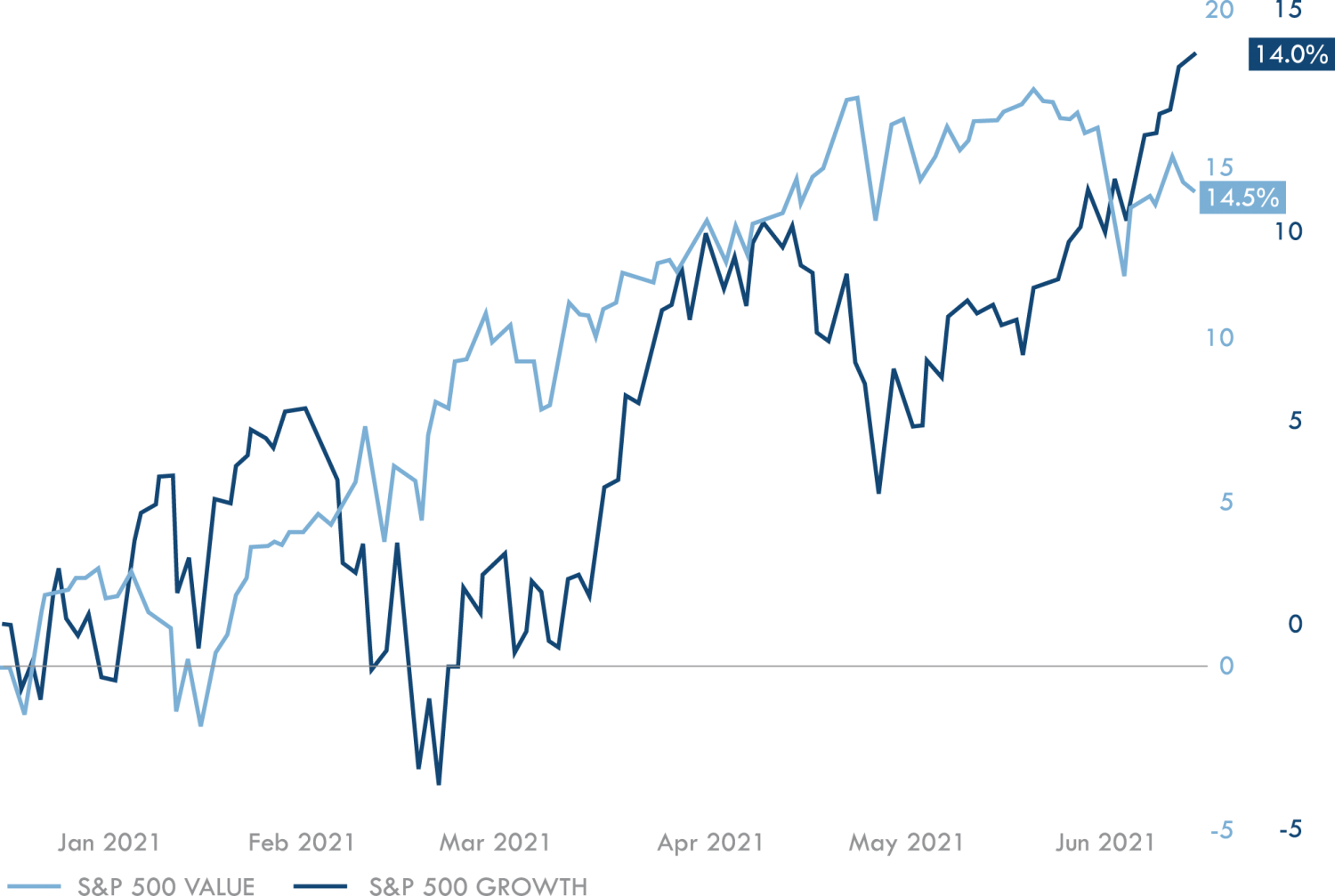 The recent supply-side Inflation is evident as we look at the winners over Q2.

As we head into the second half of the year, Investors will undoubtedly be haunted by fleeting bouts of uncertainty. Echoes of ‘this surely can’t last forever’ screech louder and louder as markets continue to notch up all-time highs on a weekly basis. This uncertainty and doubt is an inherent part of the human condition that even the most steadfast investor must grapple with.

Lately, market participants are constantly worrying about, well, everything. Their concerns range from inflation and the Delta variant to tech regulation and tensions with China. None of these fears are irrational, but they are part and parcel of any investment. While all these concerns could negatively impact markets over the near term, there is no reward without risk, and historically, it hasn’t paid to be a pessimist.

Despite the ‘seemingly’ overbought conditions and the inevitable hurdles that lie ahead, we expect further periods of solid growth in the U.S.

The cycle is risk-asset supportive for the medium-term. Central bank tightening, led by the Fed, seems unlikely over the medium term, and the major economies are in the early recovery phase from the 2020 lockdown recession.

Inflation will continue to be the determining factor for the foreseeable. Despite the leading indicators signaling a pick-up in inflation, many market participants are now making a case for more benign inflation.

Fiscal stimulus, an even more supportive Fed policy, supply-side contractions and pent-up demand will likely bring continued near-term inflation. Still, secular trends such as technological innovation and demographics will ensure these inflation figures level out over the medium/long term.

While we are broadly positive, uncertainties remain, as mentioned above. Economic statistics have been consistently positive in recent times, but this positive news stream is now simply functioning to maintain the current levels of market exuberance.

As we advance, It won’t be enough to say that business is recovering, and earnings are increasing. The market will need to hear about a stable recovery and better earnings down the road. As a result, market participants will be far more sensitive to any negative news, fuelling the fragility and volatility in the most exposed sectors of the market.

Our overarching view is that economic recovery will persist, and upside remains, fuelled by higher earnings, fiscal stimulus, and low interest rates. With that said, pullbacks and market rotations are likely, and any deviation aware from this base case scenario will create a painful environment for those holding the most speculative names.

Much of the opportunities currently lie at the sector level. Rotating out of the more exposed names from a valuation standpoint will help take some risk off the table while still offering a benefit to the upside.

Emerging Markets or All world Ex-U.S. exposure will also provide some diversification away from the record valuation levels of the current U.S. market as the recovery takes hold.

Government bonds yields should come under upward pressure as output gaps close and central banks look to taper back asset purchases. We expect the U.S. 10-year Treasury yield to trade in a 1.5% to 2.0% range over the second half of the year.

As always, caution and patience are the order of the day.