How to Protect from Inflation - Holdun

How to Protect from Inflation 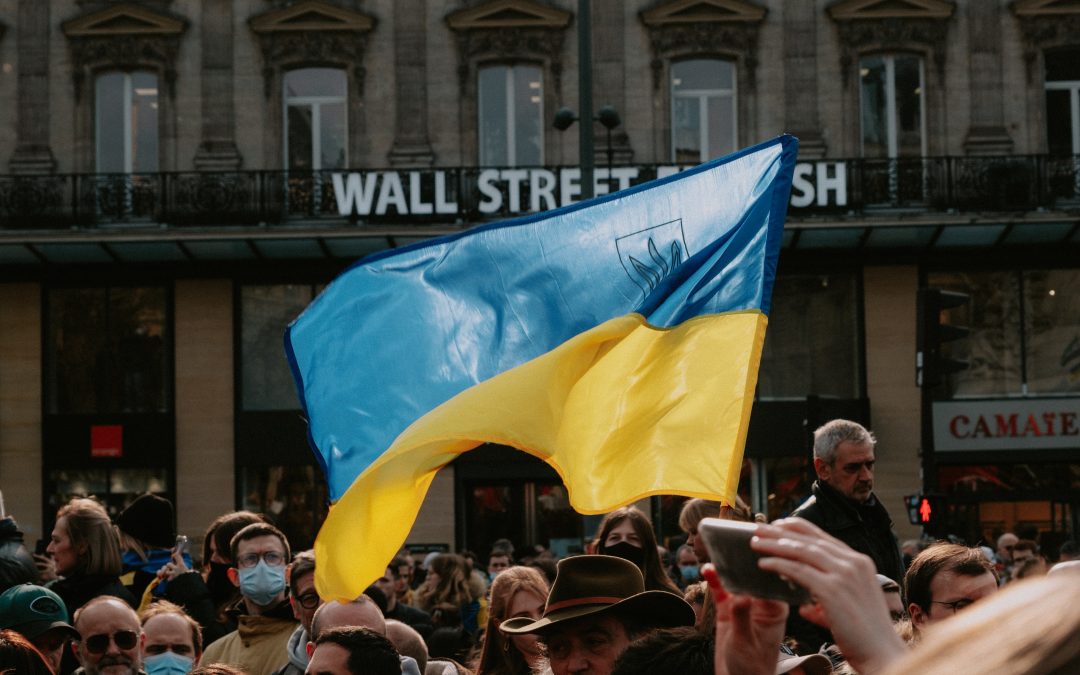 How War and Inflation Changed the Investment Landscape

Last quarter, we reflected on what was a rip-roaring year for stocks. In a year full of uncertainty, the S&P 500 returned 27% thanks to solid GDP growth, comprehensive FED support and a 34.5% increase in company earnings.

We also outlined our outlook going into 2022.

The growth rates seen early in the cycle will slow, economic and earnings figures will be suppressed by higher inflation and less accommodative central bank policies. However, there are still opportunities for risk assets in the coming year, albeit with more modest expectations for returns.

We continue to favour U.S. over International stocks. Large-cap and high-quality stocks look set to lead the way as markets will likely favour a tilt towards value stocks.

Broadly speaking, much of this outlook remains unchanged, but events over Q1 have accelerated the rate of change and created some new headwinds for investors.

At the very start of the year, money in the system, record low interest rates and easing concerns on the impact of Omicron meant stocks kept climbing higher despite some severe problems brewing in the background.

As the quarter progressed, investors were faced with new challenges around the unfolding crisis in Ukraine, stubbornly high inflation and a tougher stance adopted by the U.S. Federal Reserve to rein in inflation expectations.

In the weeks that followed, market pandemonium ensued. The tech-heavy NASDAQ index fell sharply and entered into a bear market, down over 20% from its highs, while the S&P 500 fell 12.5%.

The NASDAQ enters a Bear Market 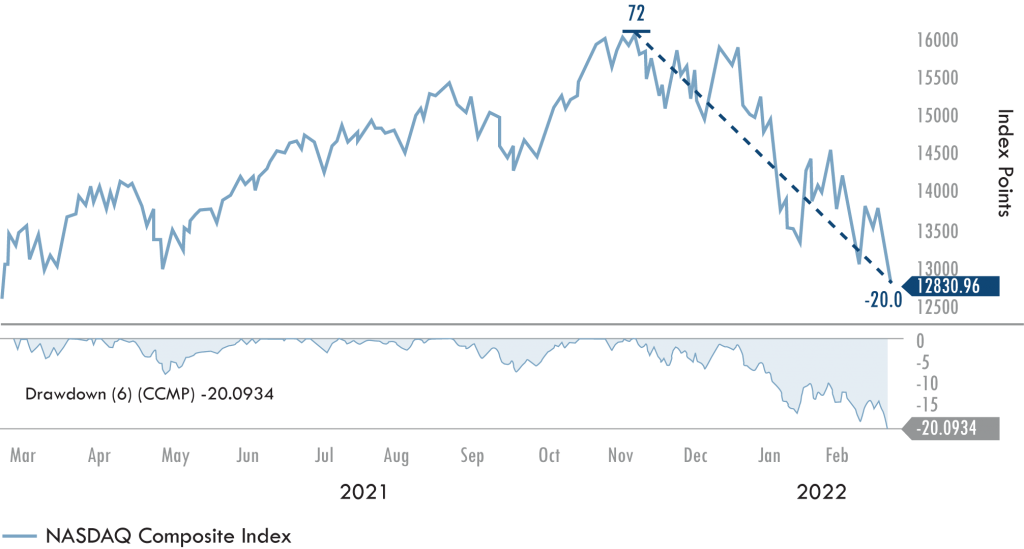 Despite the overhanging uncertainty in Europe, equity strength returned in March.

The recovery has been nearly as spectacular as the decline that preceded it.

The major indices have recouped roughly two-thirds of the losses sustained over the previous two months in a single month.

Despite the late comeback, All three major averages posted their worst quarter since March 2020. The Dow and S&P 500 declined 4.6% and 4.9% respectively, and the Nasdaq dropped more than 9%. 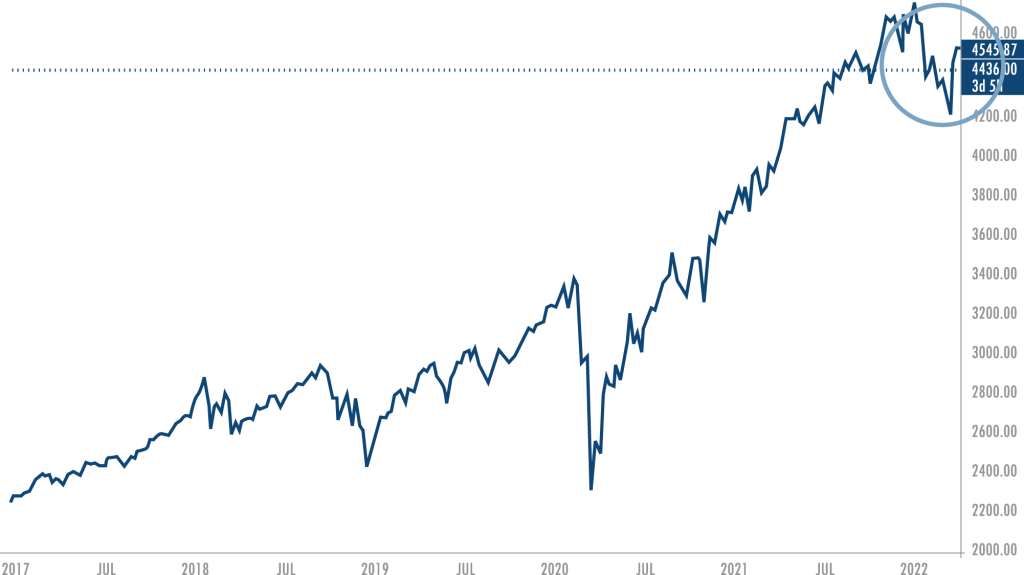 Looking ahead, volatility is likely to persist as investors digest the obvious headwinds.

The Russian invasion has amplified existing concerns over inflation pressures, particularly across the food and energy sectors. This, in turn, has forced more accelerated action by the U.S. Federal Reserve as they attempt to prevent runaway inflation figures.

Broadly speaking, commodity prices have jumped almost 30% since Russia’s invasion of Ukraine – an understandable metric when you consider the role they play in the global supply chain. 10% of the world’s crude oil exports and 25% of Europe’s natural gas supplies are produced in Russia. Collectively, they supply approximately 25% of global wheat exports and 20% of global corn exports.

While post covid era demand was already driving oil prices higher, the boycott of Russian oil pushed things into overdrive. WTI Crude Oil surged to more than $123 a barrel in early March before slipping back down to about $100 at the end of March. Through the 1st quarter, oil prices rose 33.33%, from $75.21 per barrel at the end of 2021 to $100.28 at the close of the quarter.

U.S. fixed-income performance was weak across the board. A dramatic surge in rates resulted in a yield curve inversion, signalling a pending recession.

Small-caps and mid-caps both underperformed large caps. While both are now trading at attractive P/E multiples relative to historical averages, the exact point of any move higher remains largely unknown.

The Tech-heavy NASDAQ entered a bear market in late February and fell 9.1% over Q1. The endless growth narrative that pushed many growth names to record valuations is being re-examined as we face the realities of stickier inflation and higher interest rates. Given the current conditions, the market is re-rating these stocks to account for the more realistic growth outlook.

A Bear Market for Bonds

The bond market shot back into focus in recent weeks.

For the last 40 years, the bond market has been home to one of the most impressive bull runs in history.

The disinflationary period from the early 1980s saw the structural decline of interest rates. Over the intervening years, continuous interest rate cuts were needed to facilitate GDP growth, but with rates now threading close to zero, the central bank’s weapon of choice is out of ammo. 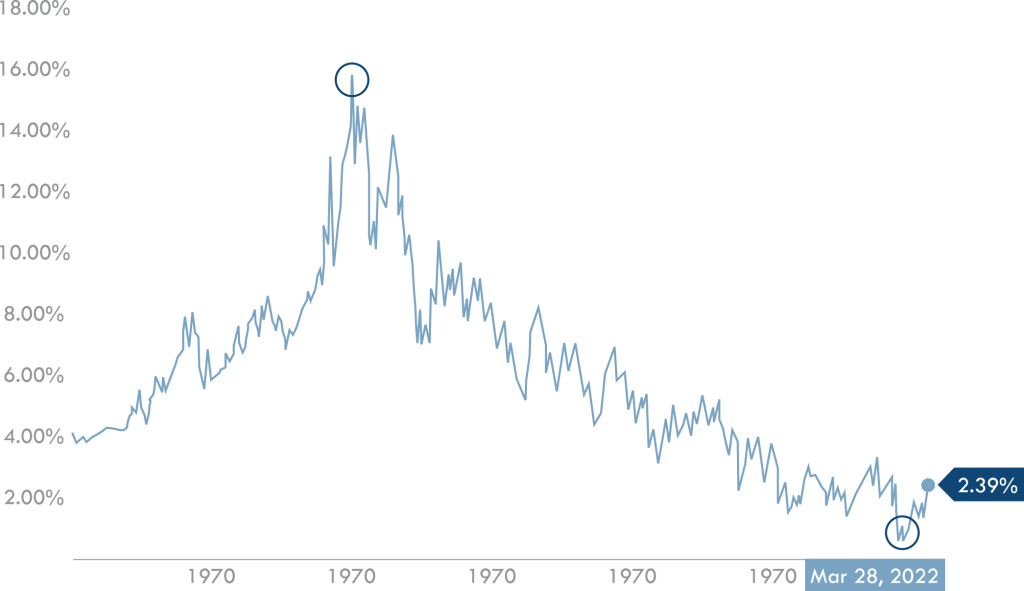 As the 4-decade bull run comes to an end, what’s next?

Are we headed for a bear market in Bonds?

Is the risk parity relationship between equities and bonds, the cornerstone of a diversified portfolio, now officially dead?

Is a recession imminent?

If historical indicators are to be believed, then a recession is on the horizon.

At the end of Q1, we saw multiple yield curve inversion, reigniting debates about an imminent recession.

Yield curve inversions between 2- and 10-year bonds have long been regarded as a solid indicator of a recession in the next 12 to 24 months. 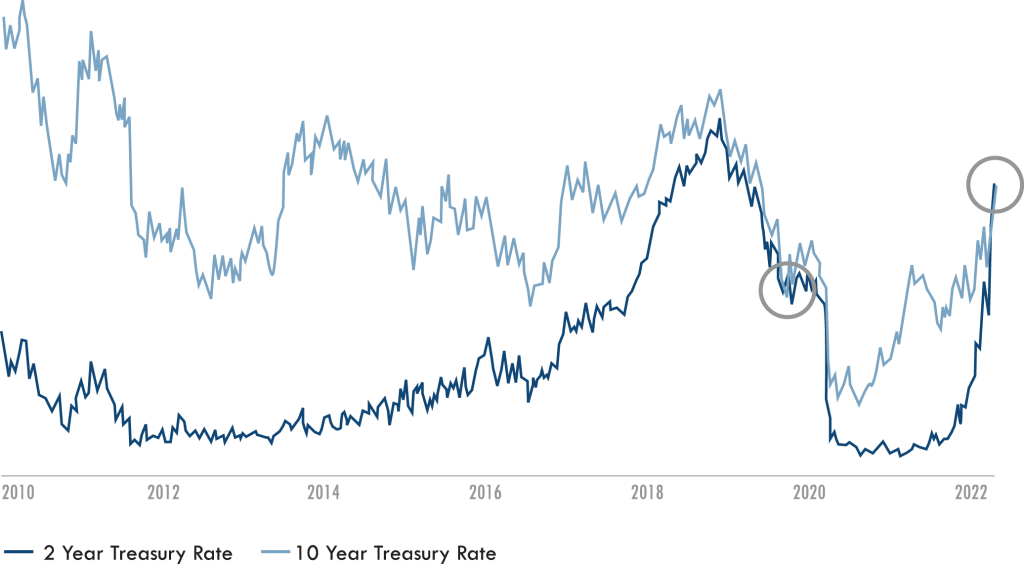 In a healthy economy, the yield curve should be upward sloping (longer-term rates higher than short-term rates). Logically this makes sense as investors seek higher returns as a reward for the greater uncertainty that comes with investing over longer periods.

When short-term interest rates exceed long-term rates, market sentiment suggests that the long-term outlook is poor, and the yields offered by long-term fixed income will continue to fall.

While U.S. treasuries’ global supply/demand dynamics call the above logic into question, any inversion is still broadly accepted as a negative economic indicator.

Since 1978 there have been six inversions of the yield curve.

In recent years, the Fed’s manipulation of the yield curve has been well documented.

Compared with the last two significant inversions that started in 2005 and 2000. The bond market has withstood massive intervention, and it makes sense that this might dull or distort the signal it sends.

I will stop short of saying this time is different, but the Feds intervention over the prior decade suggests that a yield curve inversion may not be as valuable an indicator as it once was.

For example, we saw a yield curve inversion in August 2019, yet U.S. stocks are up almost 70% since then. A switch to cash over this period would have meant missing out on the fastest bull run in history.

Another issue with trying to infer asset allocation decisions following a yield curve inversion is the imprecise nature of the time frame. While the above data shows that a yield curve inversion has preceded a recession multiple times in the past, the wide-ranging lag time (10 to 22 months) could result in considerable upside being missed if adjustments are made too early. The joys of trying to time the market.

Lastly, even with this predictive information to hand, the alternative investment options are not as obvious as you might think. At least not across traditional asset classes.

While U.S stock returns for the one-year period following a yield curve inversion is 4.7% vs. 9.0% during all other one-year periods, the data suggests that U.S. Treasury Bonds will underperform U.S Stocks over this period.

A paper from Eugene Fama and Kenneth French concluded.

We find no evidence that inverted yield curves predict stocks will underperform Treasury bills for forecast periods of one, two, three, and five years.

While recent data may suggest that equity markets will experience slowing growth, switching to bonds or cash is not the answer.

The dominant discussion point across markets has been the rate of the Fed’s tightening cycle and how high the Fed Funds Rate (FFR) will need to go to temper inflation.

So far this year, the Fed has raised its benchmark rate just once to 0.5% while also unwinding its balance sheet.

Our outlook is somewhat short of consensus.

While hawkish comments from Fed officials James Bullard and former New York Fed Chair Bill Dudley suggest that the FFR could raise by 300+bps in an attempt to counteract surging inflation, we believe the Fed remains boxed in by the math.

With over $30 trillion in debt, every 1% increase equals over $300 billion per year in interest expenses. So, if interest rates on government bonds are 3% on average, they would be paying almost $1 trillion per year in interest alone. As such, the Federal Reserve is somewhat limited in terms of how high and persistently it can raise interest rates without causing the federal government to encounter a fiscal spiral.

Of course, even if the FFR is suppressed, longer-term yields can still make substantial moves. This is something that we have seen play out in recent weeks.

Treasury Yields Increase Across the Board

This increase in yields has been painful for bondholders over the short term but will ensure a higher-yielding asset over the long term as yields roll over at higher rates.

The rising rate environment, especially at current speeds, is likely to impact the Real Estate market.

Mortgage rates have gone from the lowest rates in history to the highest rates since December 2018 in just a few short weeks. 30-year rates jumped from 3.2% at the start of the quarter to 4.7% at the end of Q1. A trend that is likely to continue. 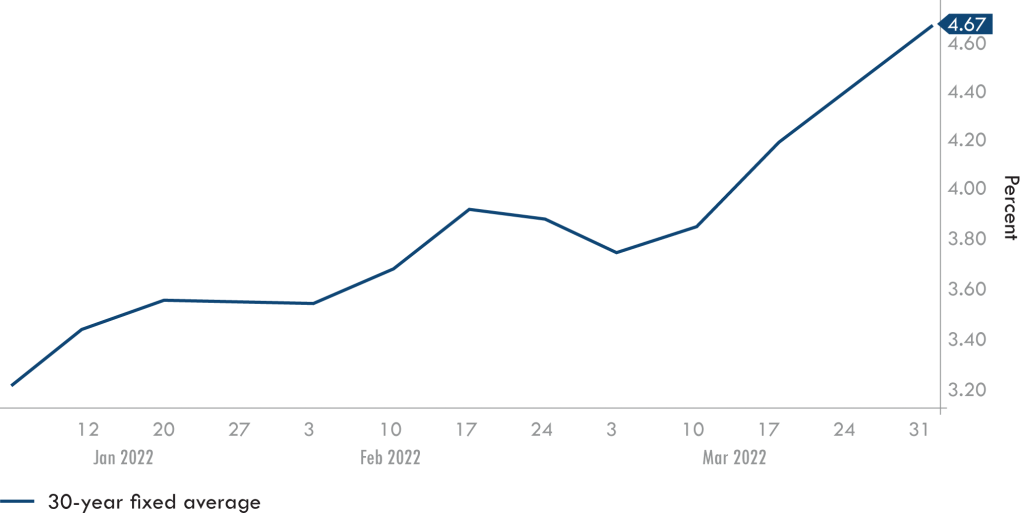 The red-hot property market has been well documented in recent months and while rising rates may allow it to cool off somewhat, the gaping shortage of available housing inventory looks set to be the dominant factor – keeping prices elevated for some time to come.

Inflation was already at its highest level in four decades before war broke out between two countries that are vital to the global supply chain.

This unrest has undoubtedly impacted any transient outlook for inflation over the short term, putting further pressure on the Fed to take immediate action to tackle inflation.

As hopes for a ceasefire fade and a war of attrition unfolds, these inflationary pressures look set to remain, increasing the likelihood of a policy misstep by the Fed.

While the probability of a recession has increased over Q1, the strength of the U.S household balance sheet and company profit margins make it difficult to be ultra bearish.

If we do experience an economic contraction, it will occur in the face of the strongest job markets on record, the highest corporate earnings since the 1950s and the most robust consumer balance sheet in history.

Despite the surge in unemployment following the pandemic, we are now essentially back to pre-pandemic unemployment levels. 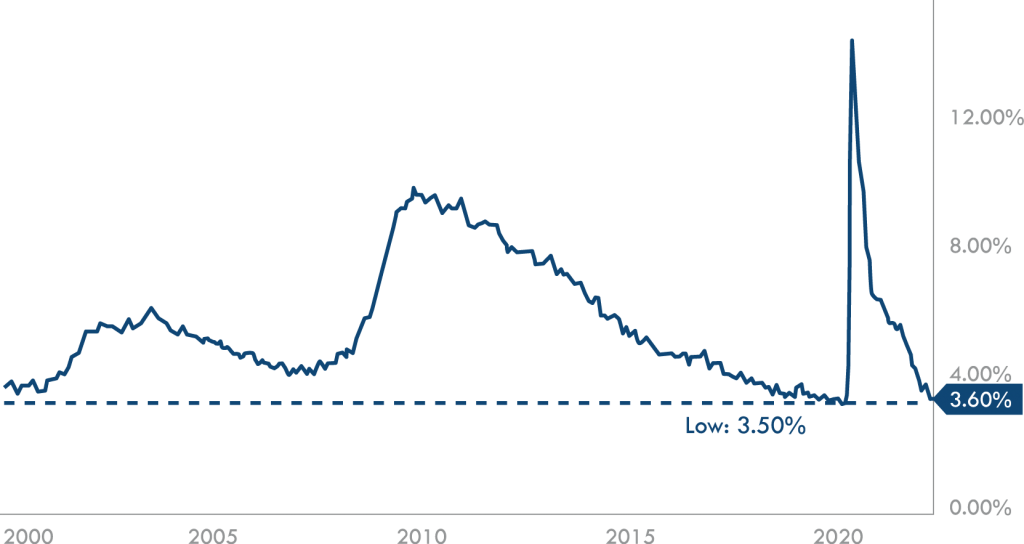 U.S. Household Net Worth has Hit a Record High
(in Trillions) 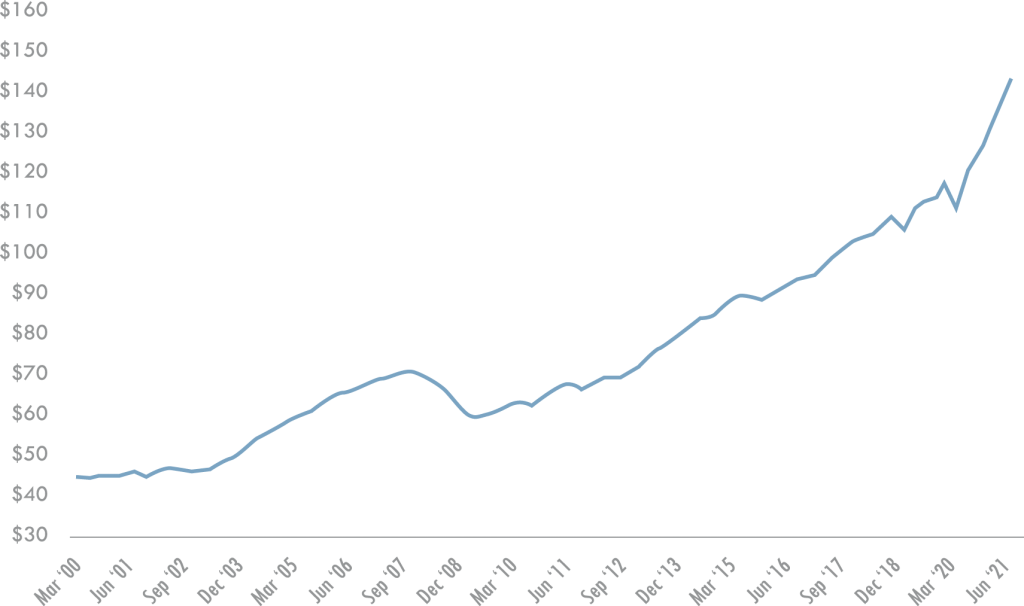 In every quarter of 2021, U.S. corporations’ overall profit margin remained above 13%, a level reached during only one previous quarter in the past 70 years.

Volatility is likely to remain as we enter into Q1 earnings season. With that said, some sectors will absorb the impact better than others. Exposure to real cash-flow generating assets such as rental real estate is crucial.

Equity exposure should be focused on companies that can pass on rising prices to consumers without much disruption to their net margins. Think consumer staples and utility companies. Even if prices rise, consumers still need groceries and electricity.

This is a trend that has played out across higher inflationary periods in the past, namely the 1940s and the 1970s. 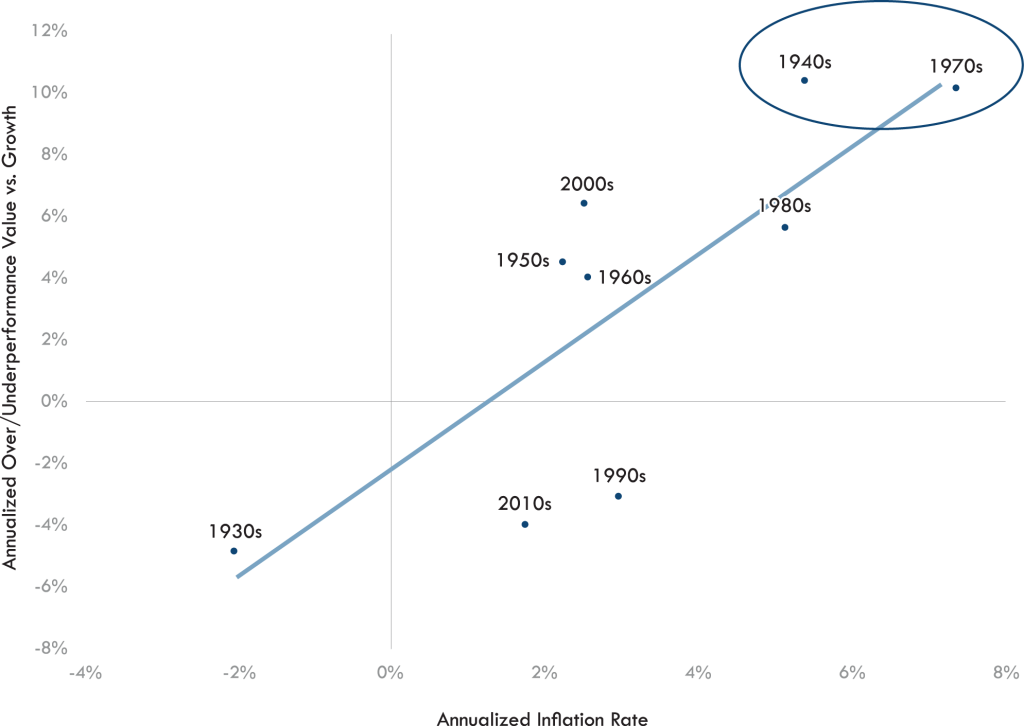 Lastly, oil and energy companies, especially those that do not hedge away their price exposure, seem to be the obvious trade of the day. In recent years, there has been a lot of talk about the stranded asset risk of oil and the environmental consequences that must be considered. Still, without an immediate substitute available, our dependence looks set to linger on over the medium-term.

The market will remain choppy as investors digest the Russia/ Ukraine war, high inflation, and a hawkish Fed but economic growth and earnings trends remain healthy. And if inflation can moderate over the year, it may allow the Fed to take its foot off the gas.

We remain positive on equities over the next 12 months, while alternatives such as rental real estate, commodities and crypto offer more diversification options relative to bonds and cash.