The author has a reputation for being somewhat provocative, as he was with “The Rational Optimist”, where he attempted to rebut some of the arguments of the climate doomsayers.

In his most recent offering, while no less optimistic about the future of mankind, his language is more measured, and the result more satisfying. 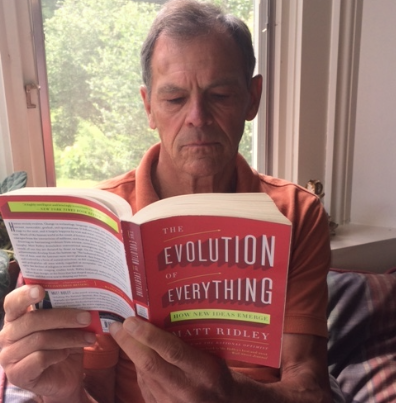 A bit like the model Bill Bryson used in his “A Short History of Nearly Everything”, we have here a series of relatively short chapters dealing with everything from genes to culture to education to money. The appeal of each will depend on one’s interests, generally and specifically.

He does show his pro-market bias from time to time, when for example comparing the cost of services offered by the private sector, say food and clothing, versus the cost of services provided by government, say healthcare and education. I don’t have to ask the reader in which direction the first have gone, and the direction in which the second have gone!

One of the author’s more intriguing hypotheses is that innovations take place only after certain pre- conditions are met; in other words, it’s not happenstance or some individual genius who makes something particularly earth-shattering occur; rather, it’s a confluence of circumstances that brings it about.

And, coming back to the book’s title, we are told that the top-down or command-and-control approach to almost any and every thing in life, just does not work. Rather, it’s the tried and true, slowly percolating, evolutionary, bottom-up approach that wins the day, over and over again.

Ultimately, trade is what makes innovation possible, as it’s the exchange of goods and particularly ideas, that propulses mankind forever forward, a “cumulative phenomenon”.

Matt Ridley, The Evolution of Everything, Harper