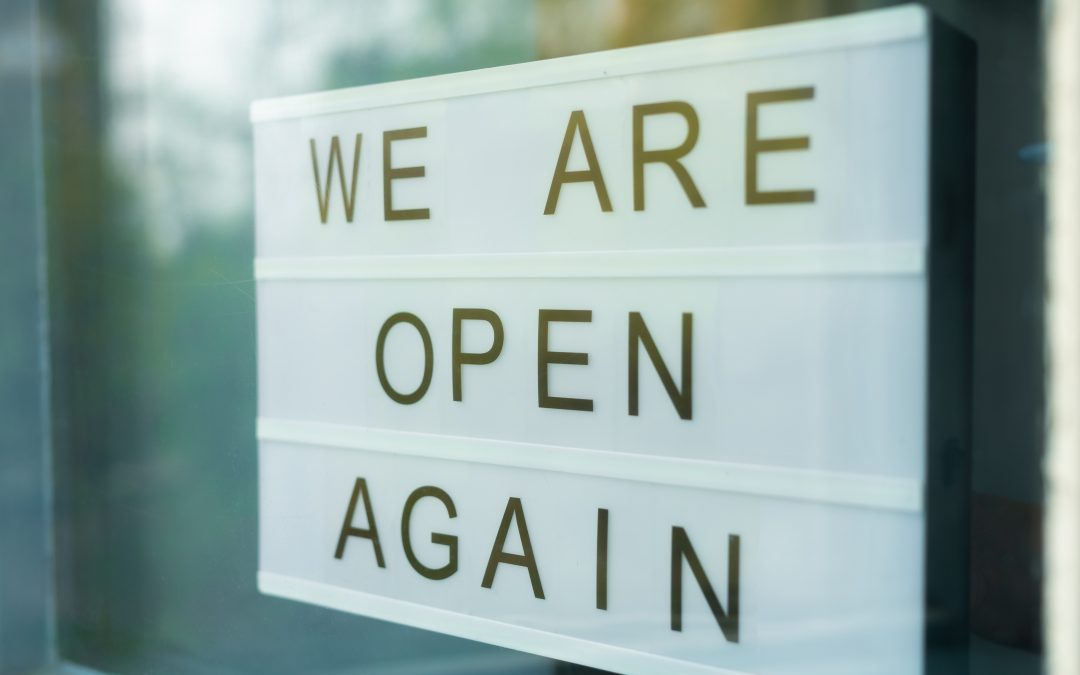 A ROUND TRIP (ALMOST)

The first half of 2020 was one for the record books, to say the least. The fastest market decline in history was abruptly followed by the best quarter for stocks in over 20 years, culminating in the largest quarter-to-quarter swing in more than 80 years. A rebound of epic proportions in its own right was made even more staggering by the fact that this historic market rally took place against the backdrop of a deteriorating economic outlook. In the U.S., unemployment soured from record lows of 3.5% in February to over 15% by the end of April. In Europe, the PMI index (a business activity indicator) fell to 13.5, the lowest on record as consumer sentiment evaporated, seemingly overnight.

The past three months were almost a mirror image of the first three months of 2020, with the S&P 500 falling 19.6% before rising 20.5%. Adding things up, the stock market was only down 4.0% through the first half of the year. The 1st quarter was so bad, and the 2nd quarter was so good that they both fall into the top 10 best/worst quarters ever since 1926.

At the risk of over-reduction, you could shorthand the recovery explanation to simply ‘don’t fight the FED.’ Generic economic playbooks have been thrown out the proverbial window in recent months as a barrage of central bank support softened the recessionary impact of the virus. Since mid-March, $3 trillion dollars of support has been rolled out, almost doubling the FEDs balance sheet in the process.

This Monetary support was coupled with a rapid fiscal response from the US Government in the form of the Cares Act. This combination broadly ensured that the virus-induced economic destruction was offset as the FED and Congress stepped in to shore up aggregate demand.

STOCK MARKET vs THE ECONOMY

The recent market rally has undoubtedly highlighted the dislocation between the economy and the stock market. Despite the uncertain economic outlook, the S&P 500 is now trading at a forward P/E ratio of 21.8, up from 18.3 at the end of 2019 as analyst slash their earnings outlook. A recent BofA Global Fund Manager Survey showed 78% of Fund Managers now believe that the current stock market is the most overvalued it has been since 1998.

While the disparity between the economy and the market may seem confusing, the reality is the stock market and the economy are far from purely positively correlated for several reasons. Narrow market breadth is one such reason, with the recent market surge concentrated amongst a small group of winners.

The S&P 500 for example, is increasingly led by a small number of ‘big-tech’ names that have prospered amidst the pandemic despite the bleak economic data. These top five holdings in the S&P 500, collectively referred to as ‘FAAMG’ (Facebook, Amazon, Apple, Microsoft and Google) have outperformed the other 495 companies by an average of 38% (26% vs -12%) YTD and now make up 24% of the index.

Big Tech Vs. The Rest 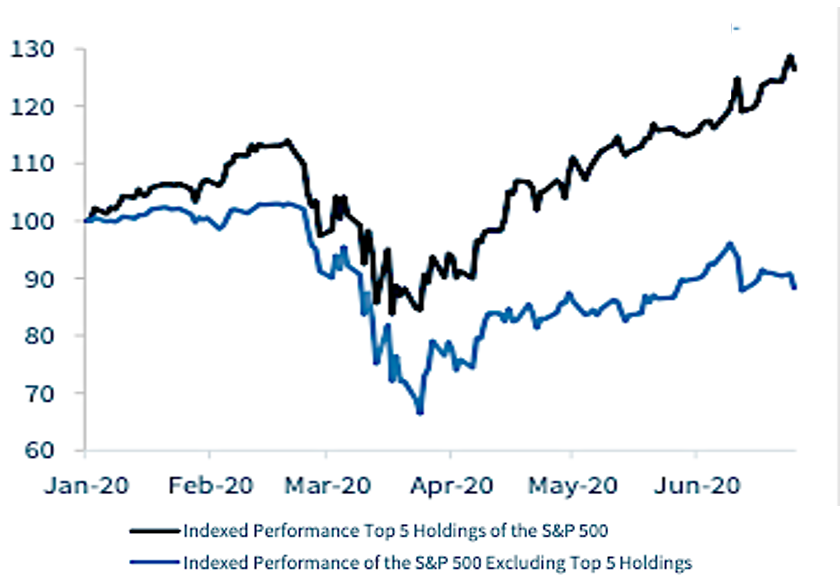 This ‘big tech’ dominance is a trend that looks set to continue despite their historically high price point. A combination of the Fed’s ‘unlimited support’ rhetoric and the ever-increasing investor appetite for large-cap quality companies well-positioned regardless of virus developments ensures that these secular growth stocks will likely continue to lead the market.

So while the statistics that underpin the health of the economy are important to monitor, the ability of these statistics to predict market movements over the short-to-medium term has been considerably diluted by the continued government support and the S&P’s exposure to a handful of ‘mega-cap’ companies.

Historically speaking, value has outperformed growth over extended periods. Based on a study from Bank of America/Merrill Lynch over a 90-year period, growth stocks returned an average of 12.6% annually since 1926 with value stocks generated an average return of 17% per year over the same timeframe.

Since 2009, the tides have changed somewhat with value investing underperforming its growth counterpart. With the spread in valuations now at their widest point in at least 25 years, the value bulls have re-emerged, adamant that value outperformance is immanent.

There is no doubt that the valuation gap between growth and value does represent food for thought with more and more investor wondering when this dynamic might change but basing your investment approach solely on the idea that value stocks have recently underperformed and therefore should outperform in the future is a shallow investment thesis.

The reality is, if value is to outperform, substantial advancements will be needed across the four sectors where the respective weightings are vastly different: Technology, Financials, Consumer Discretionary and Energy.

For value to win out, you would likely need to see inflation, rising interest rates, a steepening of the yield curve, and a disciplined approach to world oil supply. Unfortunately for the value-based cohort, it is hard to see any of these variables playing out in the foreseeable future, as structural issues have altered the landscape. Tech is entrenched in a new world of teleworking and telemedicine. The e-commerce arm of Consumer Discretionary will continue to dominate the bricks and mortar space, with or without a pandemic. Energy is up against the realities of an ESG world with stranded asset risk still a significant long-term headwind. That leaves the Financials, and with the Fed ordering the country’s largest banks to cap shareholder dividend payouts to preserve capital, following its annual stress test, it seems major loan losses are on the horizon. We did see a brief flurry across the value space for at least a few sessions in May. Still, for now, the focus seems to be back on growth as it’s innovative and competitive driven approach leaves it less exposed to interest rates and inflation changes that value continues to fall victim to.

Of course, this isn’t to say that there is no value in the value play. Value investing still has a roll in a balanced portfolio but broadly speaking, the case for value resurgence in the short-to-medium-term seems to be built on an optimistic ‘it must rebound eventually’ narrative as opposed to any specific statistical foundations.

The consumer discretionary sector was the best performer during the 2nd quarter of 2020, but its YTD performance shows how dramatically it fell before staging a comeback. The information technology sector was 2nd best but, by far, the best performer in the first half overall. Among the S&P 500, 451 stocks rose during the 2nd quarter, but only 135 were up in the first 6 months.

Gold: Weaker dollar sentiment and Coronavirus uncertainty ensured the gold rush continued into Q2, moving close to $1,800/oz by the end of the quarter and now up over 17% YTD. Despite stocks being in the green, the overhanging uncertainty and surging government debt suggests that this store of value play can track higher despite the current elevated price point.

NASDAQ: The Tech heavy NASDAQ continued its positive march during Q2, buoyed by ‘Big Tech’ domination. The Index hit new record highs in June to finish the quarter up 30.6%, up 12.1% YTD.

Crude Oil: The now less than aptly named ‘liquid gold’ remains the hardest hit asset class YTD despite jumping close to 100% over the quarter, climbing back from the $18-dollar lows witnessed in April to close out the quarter at ~$40 a barrel. The fact that oil continues to lag the broader market by a substantial margin despite its impressive recent rally outlines the staggering impact the coronavirus has had on this already ailing sector.

While the Coronavirus is first and foremost a health pandemic of tragic proportions, the economic standstill ushered in, in a bid to contain the virus, poses an undeniable threat to global markets and the world economy as a whole.

While the Monetary and Fiscal response is at the forefront of this economic recovery story, the recent improvement in economic data has been positively received by market participants. Unemployment figures fell by 4.4 million in May and June collectively, better-than-expected U.S sales data saw retail sales jumping 18% and U.S consumer spending increase by 8% in May. However, there is still some way to go before we return to pre-pandemic levels, and it is still difficult to ascertain the true organic demand until the stimulus is removed in August.

The economic reopening has resulted in a much-needed uptick in economic activity, but this move always threatened to be a double-edged sword of sorts with the previous success in ‘flattening the curve’ stalling and now reversing in many areas. Global coronavirus cases continued to peak in recent weeks. In the U.S., the average daily figures have surpassed the previous April highs with the worst effected states now re-implementing lock-down protocols. Although deaths have not yet accelerated to the same speed as new case growth, this lagging indicator will likely catch up in the coming weeks.

New Reported Cases in the US 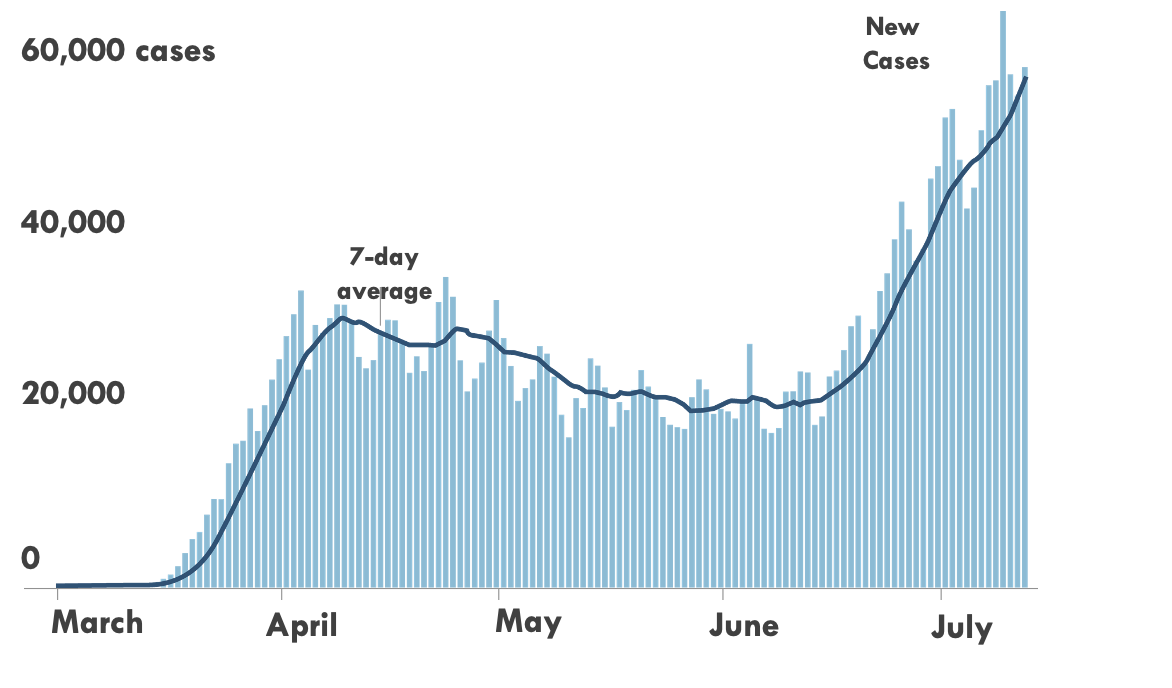 The stock market is inherently forward-looking in nature. Most recently, market participants are looking past the recent short-term volatility brought on by the virus and choosing instead to focus on the potential earnings growth into 2021 in a bid to justify current valuations. However, this forward-looking trend will become harder to justify should this financial front-running of the economy not be validated by strong growth. With the longevity and the severity of the virus still very much unknown and with a second wave now looming, the probability of a prolonged earnings suppression could test investors’ positive future earnings narrative.

Q2 earnings season will be front and centre in the coming weeks. It’s tough to recall an earnings season laden with such uncertainty. With little earnings guidance to work from and a huge disparity in terms of the analyst consensus views, we will likely see a wide range of swings across individual companies.

The S&P 500’s Year-over-year earnings per share are expected to contract by 45.5%, the lowest expected earnings since Q4 2008. Those hit hardest in Q1 are expected to struggle again this quarter with Energy, Financials, and Consumer Discretionary likely to trail the likes of Tech and Healthcare on a relative basis. 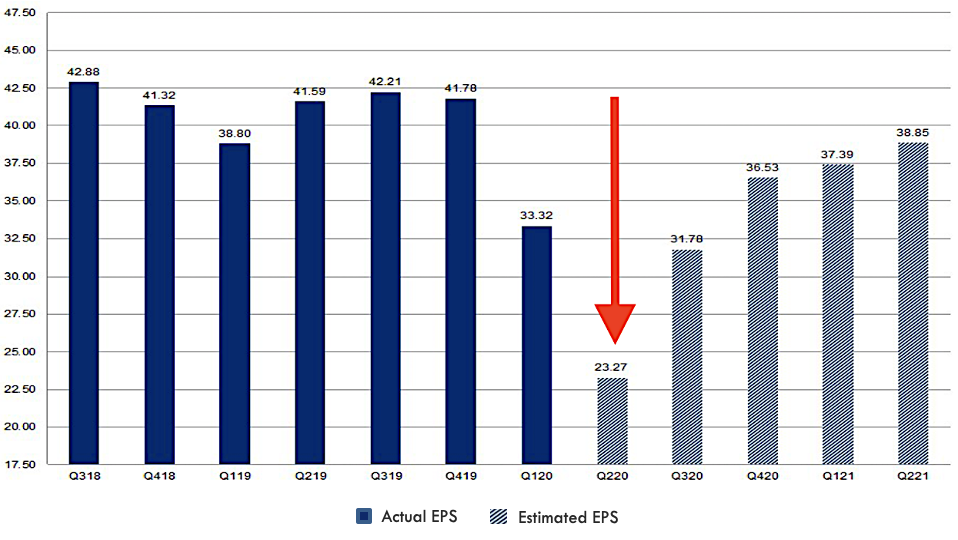 While the low earnings hurdle set by many analysts may help to mitigate the market surprise, the earnings reports over the next few weeks will provide the first real insight into the full extent of the damage to company fundamentals as a result of the pandemic.

The consensus view forecasts a slower recovery with considerable volatility over the shorter term, ultimately resulting in a return to a low growth, low rate world where the market will pay a high premium for large-cap growth and high-quality stocks.

In short, although we are unlikely to retest the March lows at this point, the market has moved very far, very fast, and this lack of clarity is sure to result in future volatility. Expect a rocky road ahead.

WHAT DOES THIS MEAN FOR INVESTORS?

The recent economic upheaval has acted as a catalyst for change across many areas of investing. Arguably the most substantial of these is the fundamental changes to the traditional asset allocation approach.

The risk parity relationship between Equity and Treasury Bonds has seemingly broken down as the long-term risk-reward ratio of owning bonds is no longer appealing.

In portfolio construction, retail investors have often gravitated towards a 60/40 asset allocation split (a portfolio made up 60% equity and 40% bond exposure). Safe-haven bonds have historically functioned as the traditional counter to equity headwinds, ensuring that a blend of the two uncorrelated assets would lead to broad-based portfolio diversification over the longer term.

However, recent monetary stimulus has created a challenging landscape for fixed income, with Treasuries offering interest rates of close to zero, all but eliminating their upside potential. As a result, Investors are now re-assessing their asset allocation split, exploring Alternative Investments as they look to generate acceptable returns while still availing of adequate portfolio diversification.

Any way you look at it, the path ahead is long and broadly uncertain. Regardless of what the latest economic data may be indicating, investors should continue to focus on positioning their portfolio’s in line with their individual timelines, long-term goals, and risk tolerance.