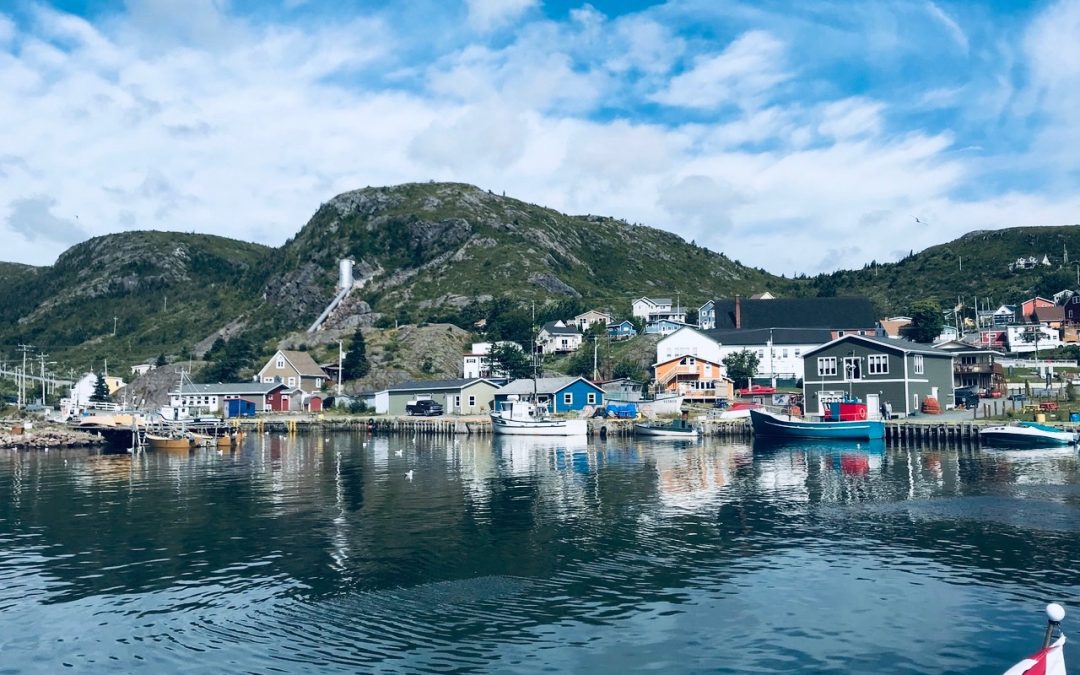 Christa and I had planned a trip to Newfoundland in September with another couple, neither of whom had ever been to the island, fondly known as “The Rock”. We had escaped Hurricane Dorian in the Bahamas only to be greeted by the tail end of Dorian off the west coast of the island, but we’ll get to that tale later.

After spending two days touring delightful St. John’s with its’ colourful rows of “jellybean houses”, we embarked on an astonishingly long drive northward to Norris Point in Gros Morne National Park. The length of the drive not only provided clear testimony of our utter ignorance of the enormous size of The Rock but also gave us ample opportunity to marvel at its endlessly unadulterated but raw beauty. 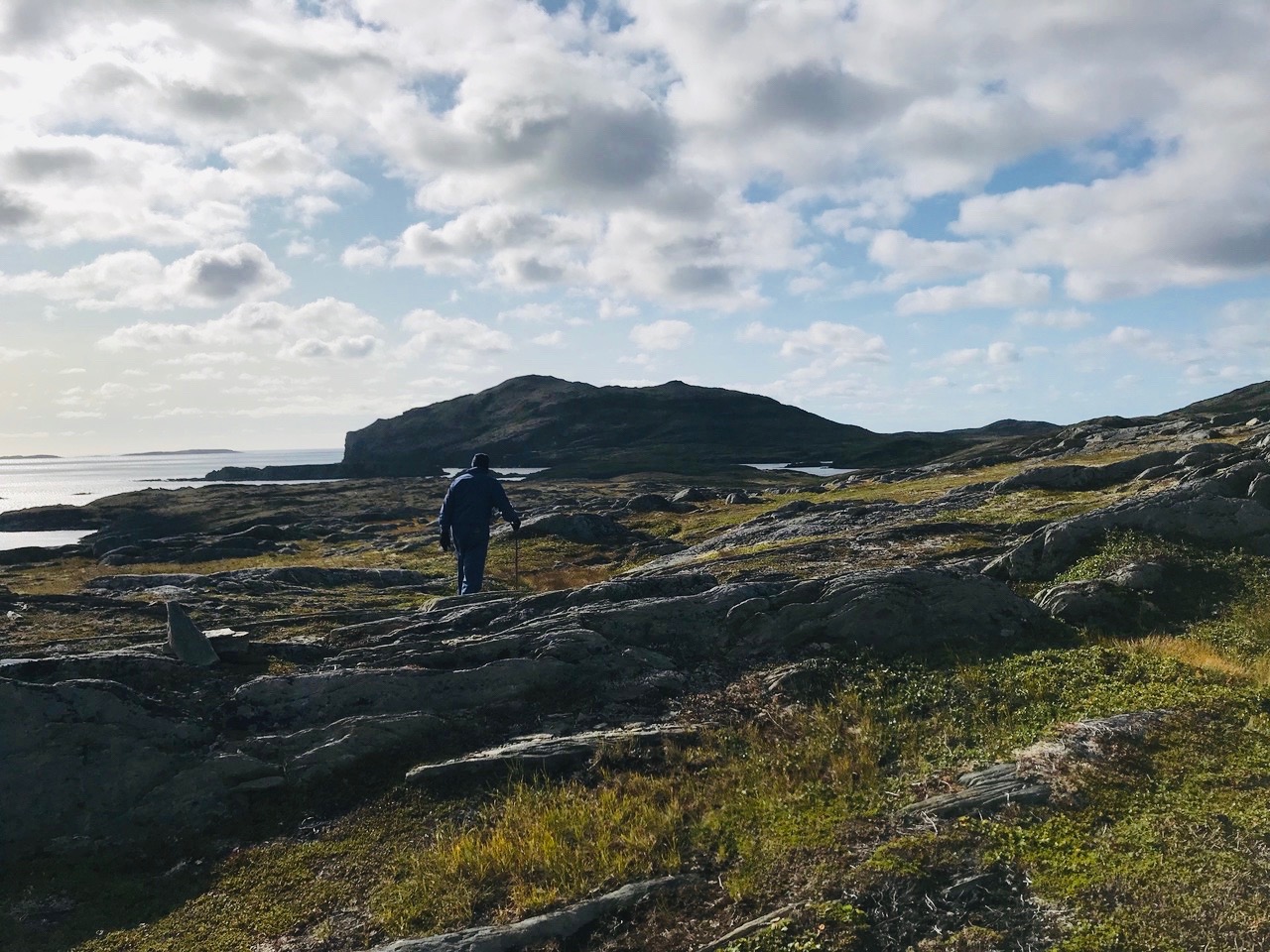 From glorious Norris Point we forged on in such heavy driving rain that any further appreciation of our surroundings was essentially eliminated, eventually arriving at L’Anse aux Meadows, the UNESCO World Heritage Site which is the only Viking site in North America. What a fascinating site to visit; it did not disappoint.

It was but a brief jaunt to the dock for Quirpon Island (which is inexplicably pronounced “carpoon”). Although we had been informed that we would be taken over to the island by boat, we were taken

aback to discover that this was but a small zodiac.  It being extremely windy as we embarked, the waters were roiling mightily and the frigid waves were high. In spite of these rather obvious conditions, our old salt of a “captain” never thought to suggest that we put on our wet gear before departure; only when we were already completely soaked to the skin did he casually haul out waterproof ponchos and tossed them to us. Wonderful – thanks so much. On the positive side – it was certainly memorable junket. For the duration of our two-day visit, the winds continued unabated so that our whale watching excursion (also on a zodiac) was perhaps mercifully cancelled and whatever hiking we did manage to do around the island was a considerable challenge. Gripping walking sticks, one had to lean 45 degrees into the wind, with head bent down and eyes fiercely surveying the rocky terrain, it was impossible to really appreciate the rugged beauty of the island.

Subsequently finding ourselves marooned in Cow Head due to the imminent onslaught of Hurricane Dorian was a cosmic joke. Cow Head – as you can probably imagine – does not have much to offer. Surprisingly, for lack of anything else to do, we loved the pub that we hung out in. Here we were entertained by a riveting US Open finals match showing on the TV, which had the added advantage of occupying several hours of our time.  But best of all was the parade of locals who showed up around 9 pm for their regular Sunday night dart tournament. It was impossible to decide what was more fun to watch – the tennis match or the local competition. Eventually, the dart game got so loud and boisterous that we retired to watch in our room, but I was sorry to leave. Our little breakfast waitress got into the finals – the prize was either a bologna steak (a Newfie favourite) or household supplies of toilet paper or paper towels. Really …you cannot make this up.

On the previous night, pre-Dorian, we watched a one-man play about Joey Smallwood which was outstanding.

So, although it was not the experience we had planned, it turned out to be great fun. And with Dorian still a memory, we did manage to go on the boat ride through the fiords…In my view, the stunning waterfalls, rocks and trees were not the highlight – what I loved most was the loudly blaring, boisterous Newfie songs which the crew played on the return leg of the trip. Spoons, tambourines and other unknown instruments were brought out by the crew who then gently coerced the reluctant passengers to participate. Thus we were provided with some hugely entertaining performances.

Best of all was a staid, elegant elderly gentleman who suddenly jumped up and launched into an astonishingly spry and expert jig. It was fabulous. 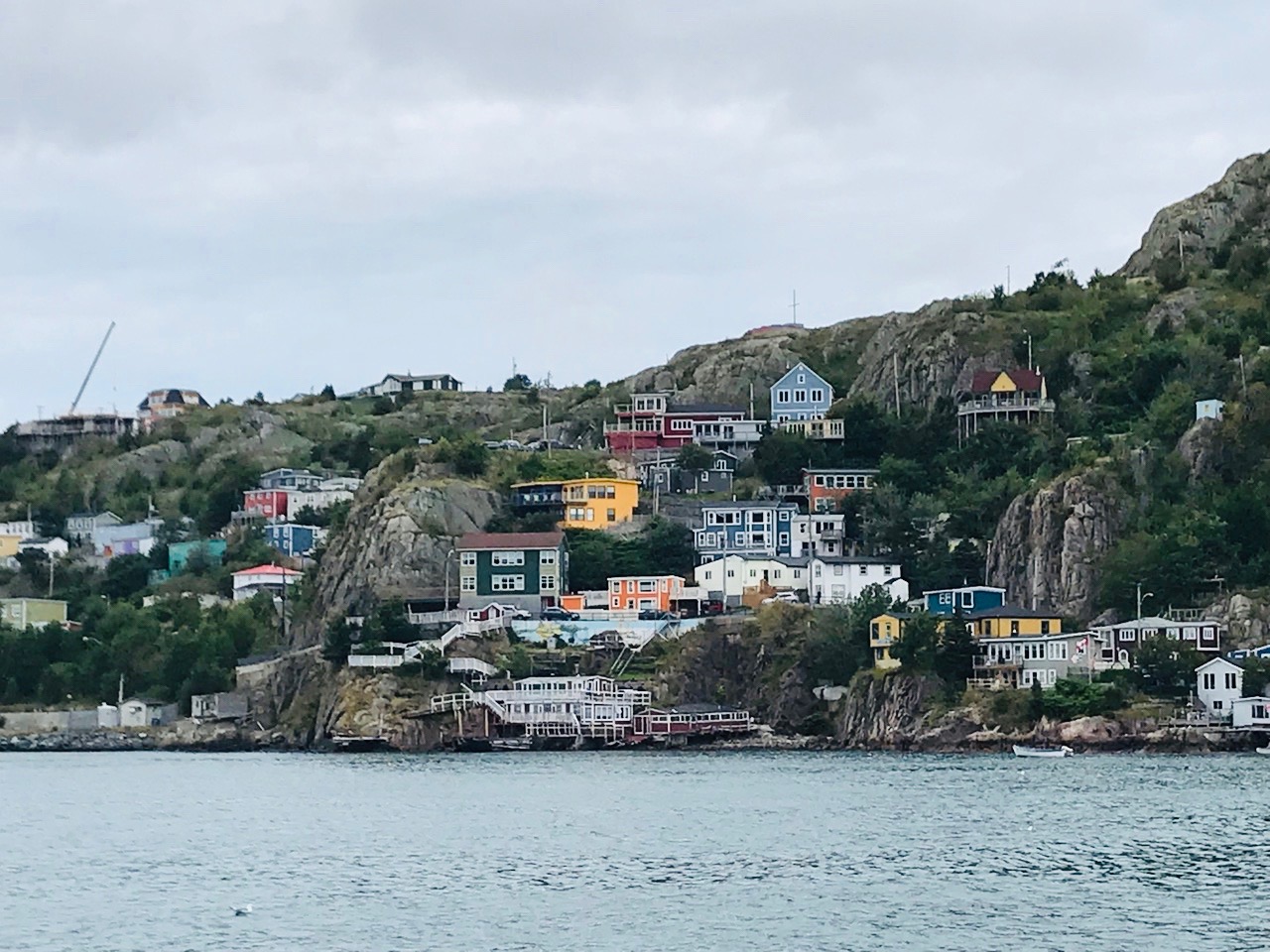 Our short little adventure on the rock left us with lots of memories, the best of which are of the many delightfully quirky locals, who live in equally quirky places such as “Come by Chance”, “Nameless Cove”, or “Little Heart’s Desire”.

There is no other place quite like “The Rock” – it is well worth a visit.
We love sharing our stories. If you would like to share yours, we would love to hear them!