The Worst 6 Months in History - Holdun

The Worst 6 Months in History 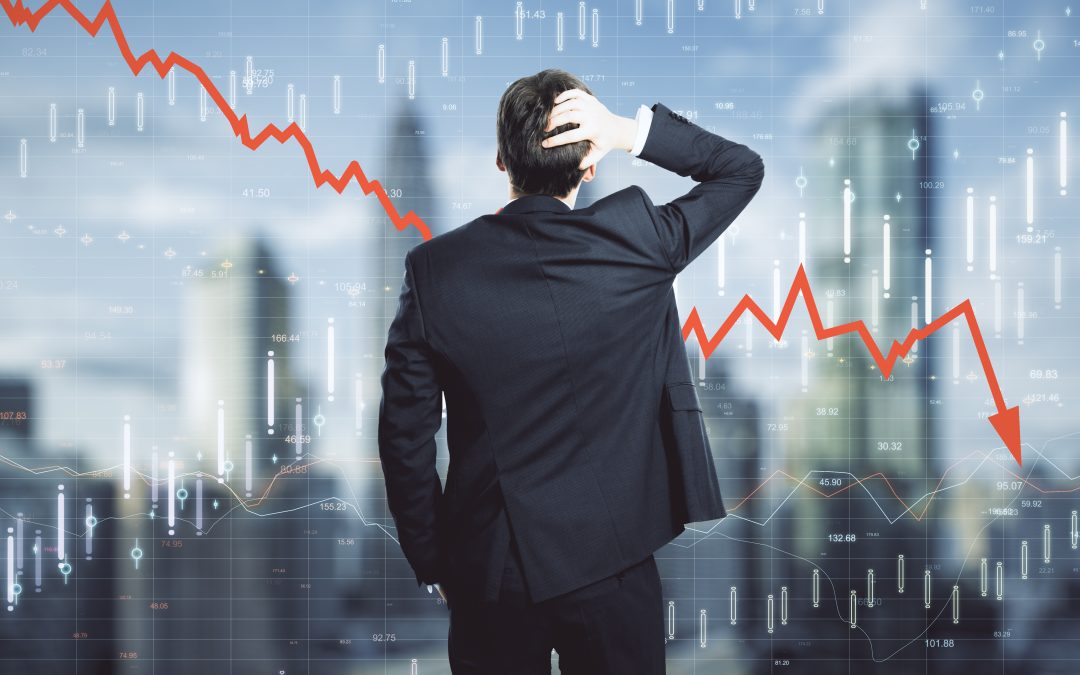 Since the start of the year, fears of what the economy and markets would look like without unlimited FED support, slowing growth, higher interest rates, and sticky inflation have decimated investor sentiment. We saw this play out in Q1, and the precipitous decline went into overdrive in Q2 as inflation hit its highest level in over 40 years.

With inflation now more persistent than first anticipated, central bank policies have been forced to pivot to a more aggressive tightening cycle. This dramatic shift in monetary policy, from a low interest rate environment to one where official interest rates are rising and are expected to continue rising considerably, has inevitably weighed on equity markets and bond markets alike.

Meanwhile, the NASDAQ composite suffered significant losses as the widespread woe’s intensified across the tech sector. The composite dropped 22.4% to record its biggest quarterly drop since 2008. Those losses pushed the NASDAQ deep into bear market territory, down nearly 32% from an all-time high set in November and down 29.5% year to date.

Instead of just spitting out performance numbers, let’s put the recent equity market returns into context.

Firstly, 97% of all previous 6-month periods since 1926 have provided higher returns than the first half of 2022.

The Great Depression, 1937 crash, WWII, 1970s bear market, bursting of the dot-com bubble and 2008 crash are the only 6-month periods worse than what we just experienced.

Essentially the first half of this year is now part of the unenviable who’s who of terrible returns.

The Bloomberg U.S. Aggregate bond index is down more than 10% YTD.

While the year is not over yet, bonds have a lot of catching up to do to avoid recording the worst year on record. The worst year prior to this was a mere -2.9% drop in 1994. 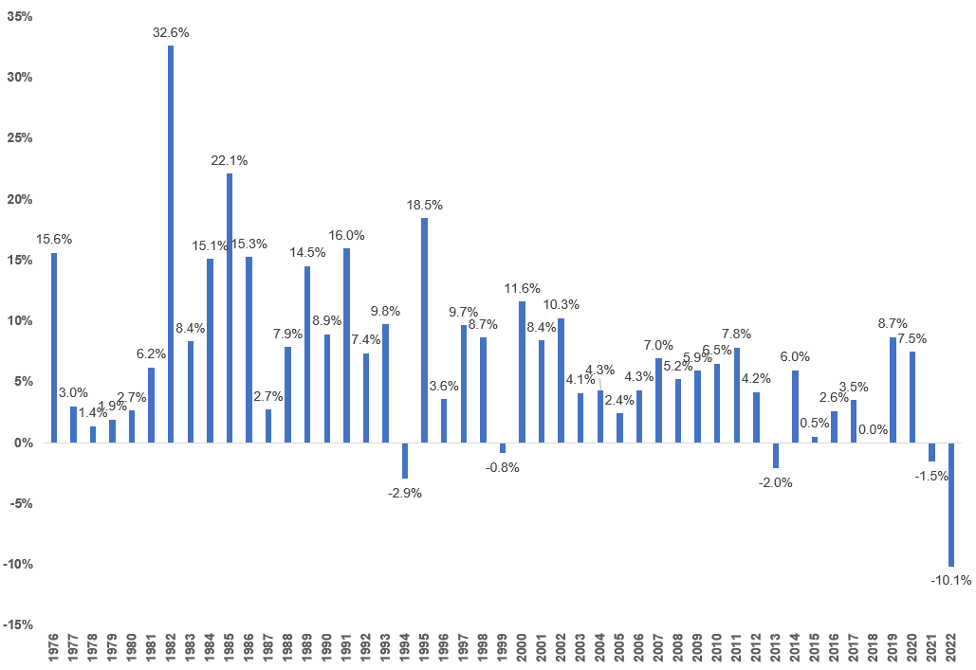 From a balance portfolio standpoint, the average 60/40 portfolio was down 16.9% this year through June 30.

That performance would rank only behind two Depression-era downturns, in 1931 and 1937.

Again, not a group you want to be a part of.

Add 40-year-high inflation into the mix and you are left with one of the worst 6 months in market history.

While the latest chapter in markets has been particularly tough for all investors, the reality is, market declines are inevitable in investing. Outside of fraud, it’s completely unavoidable. Markets don’t continuously move up and to the right forever.

The reason markets can go up a lot in the long run is because they make you pay the cost of admission by going down a lot in the short run.

You cannot earn decent long-term returns without experiencing periods of excruciating losses from time to time.

The past 6 months were one of those times.

While reflecting on the last 6 months helps bring the recent performance into context, a much more pressing question remains:

Is this the bottom or is the worst yet to come?

It’s easy to forget that the strength of the economy is the very thing causing this dreaded inflation surge.

While it is crucial that a balance is found, it is strength in areas such as the labour market and household net worth that may allow for a soft landing as we move forward.

Despite the looming economic pressures, we remain in what is arguably the strongest labour market in history.

In the U.S, there are two jobs available for every one person who is unemployed and looking for work.

US Employment vs. Non-Farm Job Openings 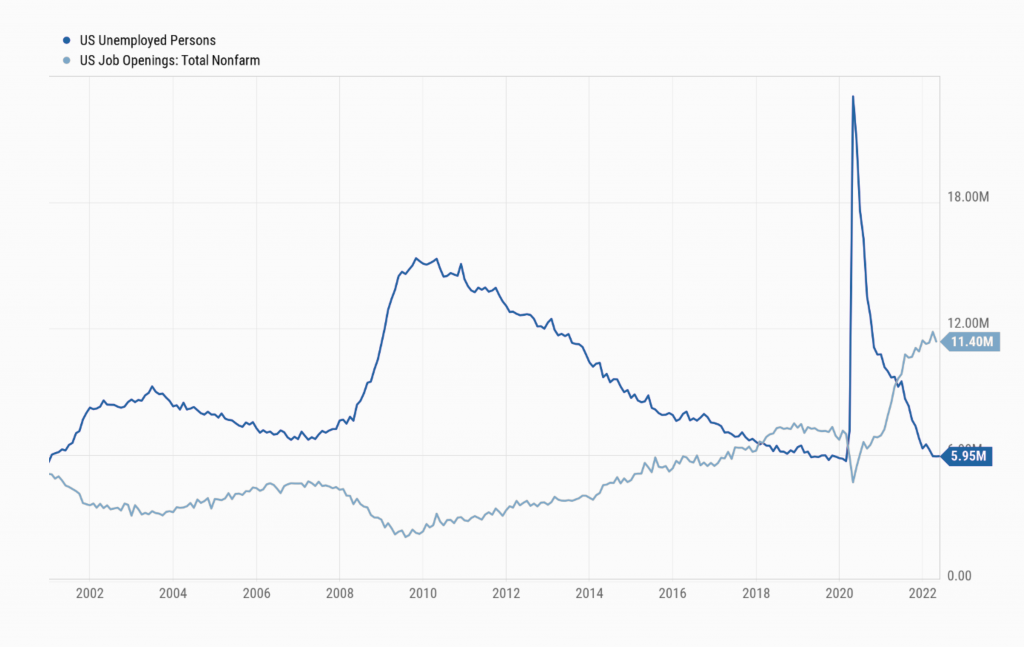 Certainly not what you would expect from an economy thought to be staring down the barrel of a recession.

While a strong labour market is a sign of a healthy economy, balance is key here.

Currently, the supply/demand dynamic is skewed in favour of the employee, which is contributing greatly to inflation and narrowing profit margins across the board.

The most pivotal part of the central bank’s policy is to restore a more sustainable balance of power across the labour market.

Only time will tell if the current tightening cycle will restore the labour market to a healthy equilibrium or skew the balance of power in the opposite direction.

Multiple rounds of government relief and a sharp reduction in expenditures during the pandemic has created a margin of safety for U.S. household savings that will help to support the economy as monetary policies tighten.

US Household Holdings of Cash and Cash Equivalents 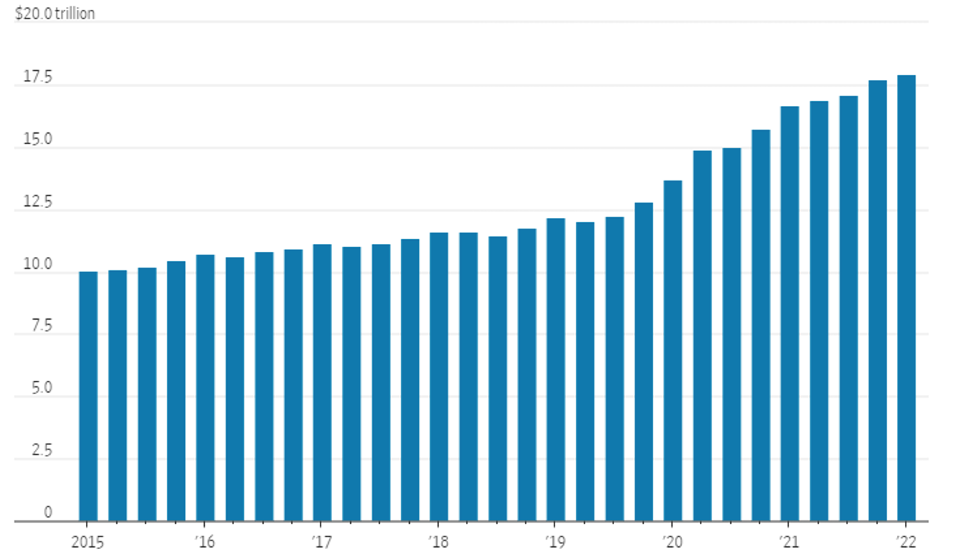 US Household Net Worth has Hit a Record High
(in Trillions) 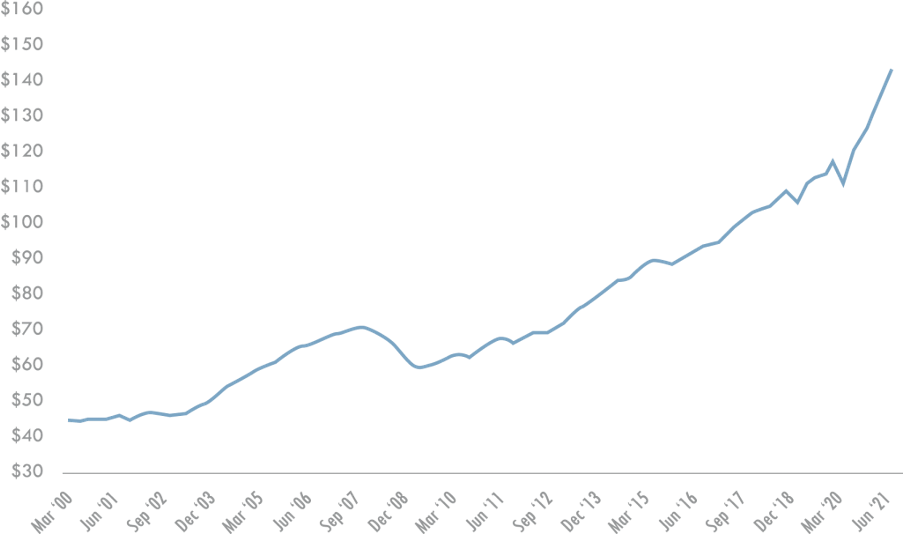 While this newfound wealth is partly to blame for the ominous inflation figures we are now facing, it is also the very cushion that will soften the blow, provided the Fed’s policy adequately threads the needle.

Finding the balance is key.

Of course, if this balance is not found, people will lose their job and wealth levels will fall, but there is a high probability the downturn could be minor because consumer balance sheets are in such good shape.

Simply put, the U.S. consumer has never been more prepared for a recession.

Recent inflation figures have been well documented, and despite a brief glimmer of hope in April, CPI figures continued their upward trajectory in May, jumping to 8.6%, a 40-year high.

This grim May inflation report resulted in the largest rate increase since 1994 as the FED raised rates by 75bps to a range of 1.5% to 1.75%.

As we move forward, there is tentative hope that the beginning of the end has arrived for inflation. Expected inflation has drop, as have some of the major commodity prices. 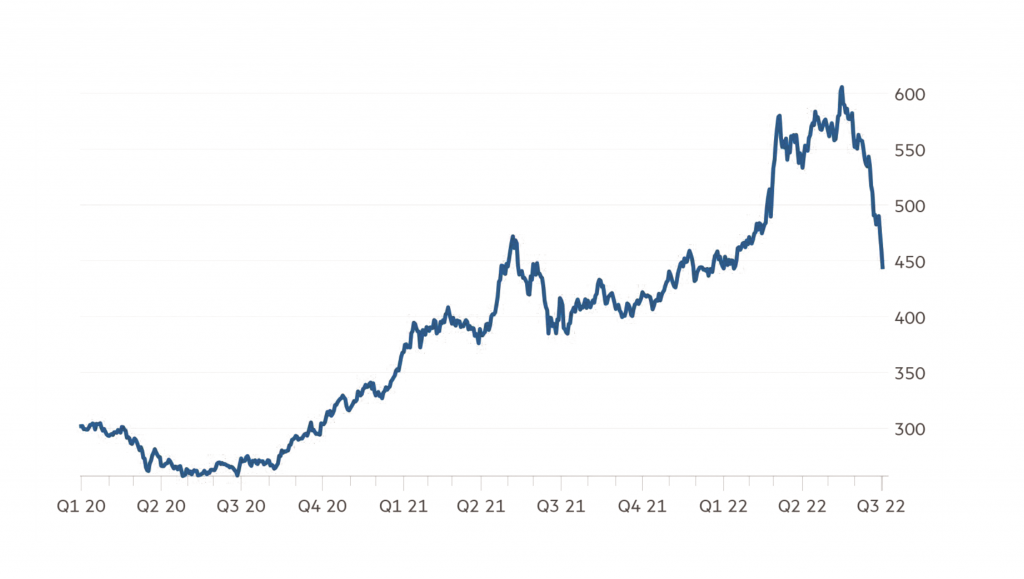 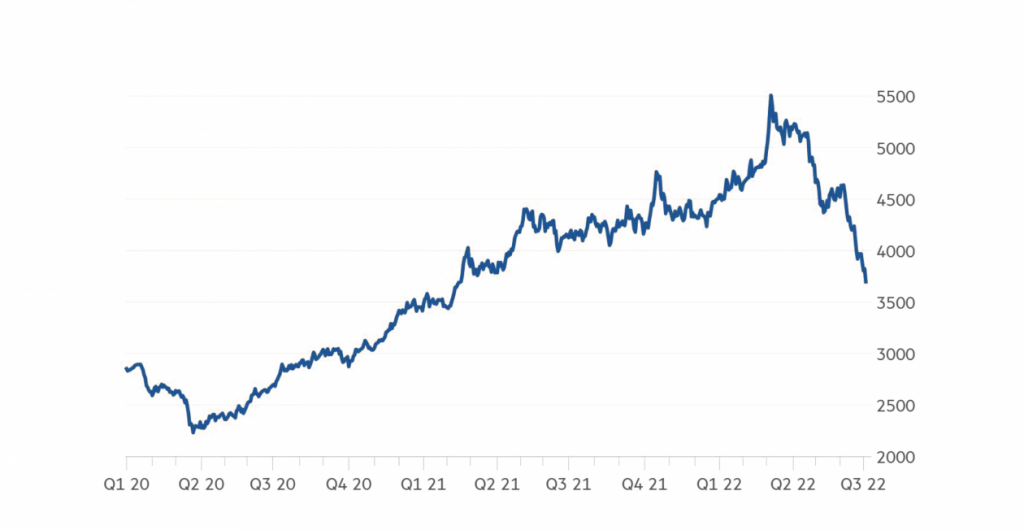 We are also now facing far more aggressive sentiment from the FED in this fight against inflation. After a chorus of criticism that the Fed has been too slow to respond to a historic surge in inflation, the central bank has now made it clear that monetary policy tightening won’t end until prices are under control.

The reality is that any necessary action taken to control inflation will also slow the economy, but to what extent is yet unknown.

Consumer sentiment is as low as it’s ever been going all the way back to the early-1950s as the rising cost of food, gas, and other essentials weigh on American consumers.

The University of Michigan’s closely watched Survey of Consumer Sentiment Index slumped to 50.2 in the preliminary June survey, marking the lowest level recorded by the survey.

While it is crucial to take the anecdotal nature of any survey with a pinch of salt, this index does provide a snapshot of the economic mood at any given time and as consumer sentiment wanes, so too will consumer spending.

Crypto Currencies have always been volatile, and ‘boom bust’ cycles have been a staple in their price history.

With that said, the latest iteration has been the most spectacular to date.

Bitcoin continues to trade at less than one-third of its all-time high near $69,000, hit in November 2021, and just capped its worst quarter since 2011 – a year in which it cracked the $1 threshold for the first time. 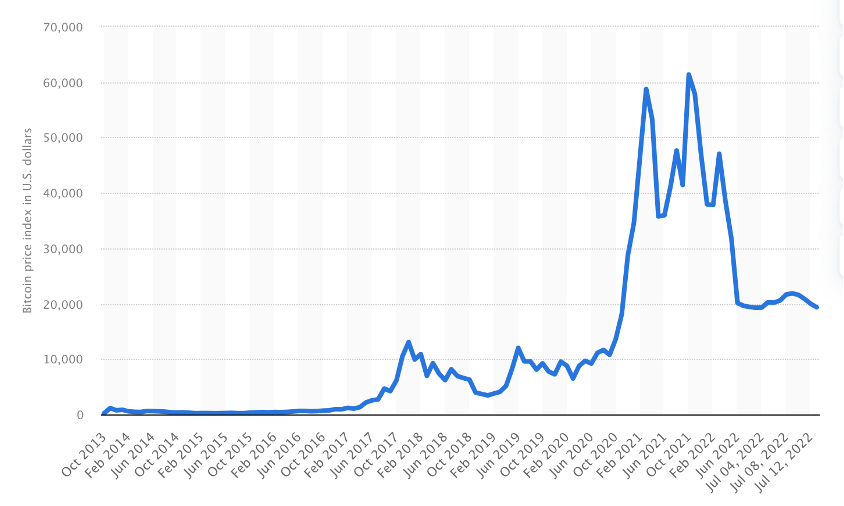 The market capitalization of cryptocurrencies has tumbled from nearly $3 trillion eight months ago to roughly $875 billion as investors settle into the next “crypto winter.”

And what a bitterly cold winter it has been. Across the broader market, more than 70% of the top 300 coins have already lost more than 90%.

The drawdown in digital asset prices has come, in part, from exogenous factors such as higher inflation and the tightening of monetary policies from Central Banks.

But along with macro factors, cracks in the crypto industry itself have exacerbated recent price declines. The collapse of the Terra stablecoin ($70bn), Celsius ($5bn) and the failure of the hedge fund ‘3 Arrow Capital’ ($17bn) has forced mass liquidations. This, combined with serious issues in many “legitimate” actors such as BlockFi, Nexo, Voyager, etc., is causing fear, uncertainty, and doubt among market participants.

The “cascading collapse” of major digital-asset projects has helped expose the leverage in the system. As the remaining leverage gets flushed out, indicators suggest that we are nearing the cycle bottom as long-term investors begin re-entering the market.

They say history doesn’t repeat itself, but it often rhymes. At this point however, even the rhyming has stopped. The pandemic policy changes have left us with skewed data figures, manipulated comp stats and a remarkably unfamiliar backdrop resulting in immeasurable uncertainty amongst investors across the globe.

During times like this, it is best to break complex problems down to their simplest forms and concentrate solely on the most crucial variables.

The most crucial variables in this case: Inflation and Fed Policy. An infinite number of potential outcomes are possible over the coming months, but all will be derived based on the aggressiveness of future fed adjustments and the persistence of inflation.

As it stands, wrestling inflation lower could be a slow and painful process but it appears to be moving in the right direction.

Production and shipping issues tied to the pandemic have shown early signs of easing but remain while the war in Ukraine continues to elevate food and fuel prices.

On the opposite side, consumer demand remains strong, buoyed by savings amassed during the pandemic, while labour market strength continues to fuel rising wages. With that said, the record low consumer sentiment readings combined with the first decline in household savings figures since the start of the pandemic could help to temper demand going forward.

From here, The ability of Central Banks to thread the needle between economic overheating and recession will determine all short-term moves in the market.

The Fed’s ability to reduce inflation has never been in doubt. What has been in doubt is their willingness to inflict the level of economic pain necessary to do so, but this appears to be changing.

Only time will tell if this new, more aggressive stance on inflation will strike the right balance.

Namely, the reduction in the equity risk premium. Given the significant rise in bond yields, equities are no longer cheap on a relative valuation basis and are expensive on some measures versus bonds.

Lastly, as we enter earnings season, many companies may have to endure earnings downgrades due to margin pressures from input and labour costs. These earning adjustments could result in considerable price action as fundamentals worsen.

Before we can declare an all-clear for stocks, investors need to believe we are at the peak of policy tightening and inflationary pressure. Given the risks around reduced earnings and an overly aggressive central bank policy response, we see risks in equities still being skewed to the downside over the short term.

As previously stated, diversification remains the order of the day. We recommend allocations to defensive equity, alternatives and real assets as part of a well-diversified portfolio. These have proven beneficial this year as both equities and bonds have suffered losses.

Finally, remember, panic is not an investment strategy.

Over decade-long time horizons, your investment performance will mainly be derived from how you handle the inevitable corrections, bear markets, and market crashes. So, while the current market pessimism seems infinite, markets will rebound, and a disciplined and diversified strategy will ensure long term gains.